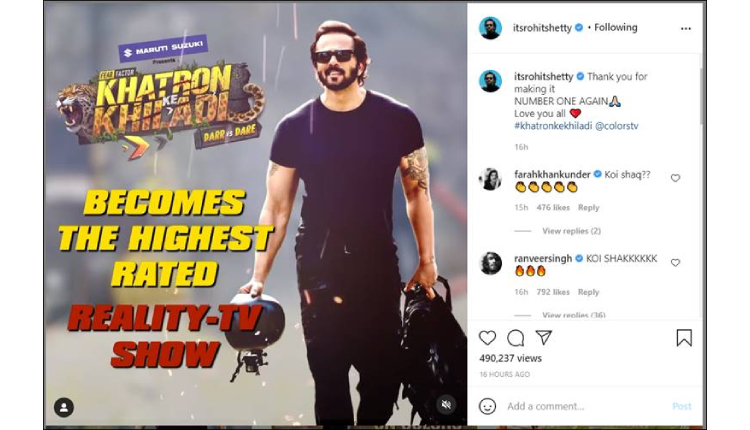 The viewers and fans certainly can’t get enough of the action and adventure that their favourite stars have brought for them! The previous successful seasons of COLORS’ ‘Khatron Ke Khiladi’ had left the fans wanting more action, and its brand-new season gave them just that. Through meticulous planning, some highly daunting stunts were brought alive in Cape Town featuring host Rohit Shetty and a slew of promising contestants. Weeks into its launch, the show has only been soaring high and has become the top-rated reality show on Indian Television.

The master of action and show’s host Rohit Shetty expressed his happiness and gratitude through a post on Instagram and the congratulatory messages came pouring in from his industry peers and friends. Among them was also the film industry’s most energetic superstar and ‘The Big Picture’ host Ranveer Singh! Expressing his sheer excitement for this news, the actor wrote, “KOI SHAKKKKKK”! acknowledging Rohit’s contribution to the Khatron Ke Khiladi’s success. Abhishek Bachchan, Farah Khan, Varun Sharma, Amruta Khanvilkar and others also congratulated Rohit on the milestone.

Stay tuned and watch ‘Khatron Ke Khiladi’ every Saturday and Sunday at 9:30 PM only on COLORS