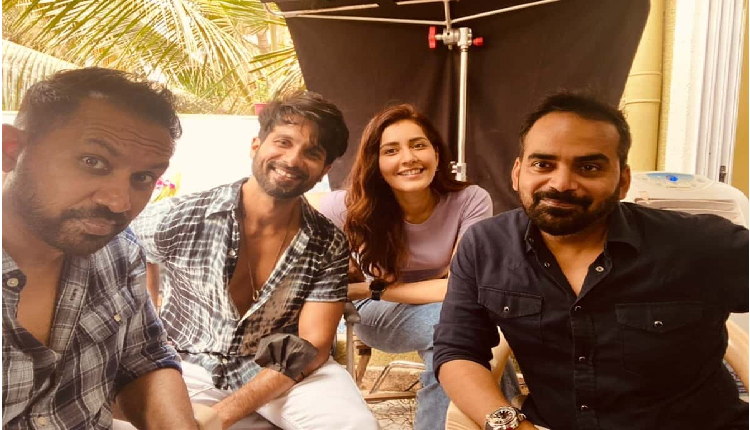 Shahid Kapoor is soon going to make his web debut with Raj and DK’s untitled web show and his fans are super excited to see him on the OTT platform. The actor will be sharing screen space with Vijay Sethupathi and cannot wait to work with him.

On Sunday, the actor posted a video of him on Instagram and wrote, “Waiting on set call me soon @rajanddk..can’t wait to share the frame with @actorvijaysethupathi sorry @rashiikhanna I’ve got too used to having you around on set.”

The show which is still untitled will be a quirky drama thriller. It will feature Shahid Kapoor, Vijay Sethupathi, Raashi Khanna and Amol Palekar. The show co-written by Sita R Menon, Suman Kumar and Hussain Dalal will be released on Amazon Prime.

On the work front, Shahid will be seen in ‘Jersey’ which is a sports drama directed by Gowtam Tinnanuri. The film is a Hindi remake of the superhit Telugu film of the same name which was released in 2019. It also features  Mrunal Thakur, Pankaj Kapur, Tusshar Kapoor, Sharad Kelkar. The film is presented by Allu Aravind and produced by Aman Gill, Dil Raju and S Naga Vamsi .

It is a story of a 36-year-old cricketer who stopped his cricketing career ten years ago. He decides to return to the game and represent the Indian Cricket team and fulfill his son’s wish for a jersey as a gift. The film is scheduled for a theatrical release on November 5, 2020.

ALTBalaji – MX Player’s Cartel Trailer: The Game of Power and Revenge that rules the city Begins!