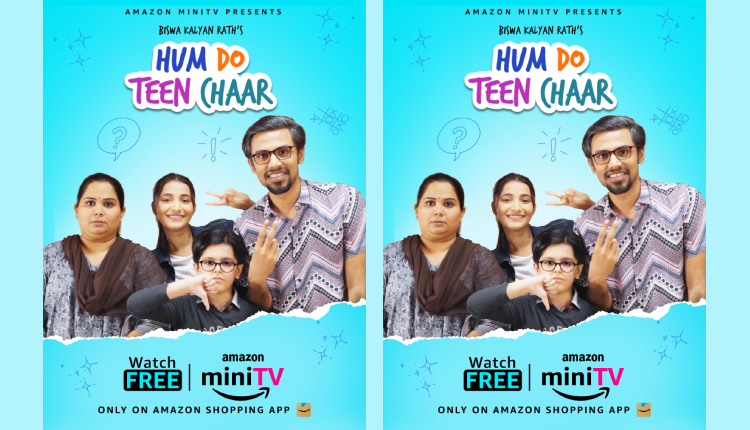 Amazon miniTV today announced the premiere of their upcoming slice of life web-series ‘Hum Do Teen Chaar’ featuring popular artists – Sumukhi Suresh and Biswa Kalyan Rath in lead roles. Created by OML, ‘Hum Do Teen Chaar’, is the story of a husband and wife where the former unsuccessfully tries to make his way through some sort of business and the latter is a police constable, whose life revolves around her job and their two kids. The first four episodes of the show will be released on Amazon miniTV on March 29th followed by one episode per week every Tuesday. The various episodes present the audiences with a slice of life story that every middle-class family can relate to.

“I am so excited that I finally got to act in a Biswa Kalyan Rath creation! Hum Do Teen Chaar was a great experience, especially since the writers Prashasti, Rohan Desai and Biswa have written a hilarious script. We already know that show is a hit because a popular streaming service is backing this.”, said, Lead Actor, Sumukhi Suresh.

“I have always enjoyed being part of projects that narrate relatable stories and Hum Do Teen Chaar is exactly that. It is a story that the entire family can sit and watch with the heartiest laughs. I am confident that the audiences will relate to the show and binge right from the time it premieres on March 29, on Amazon miniTV”, said, Lead Actor, Biswa Kalyan Rath.

‘Hum Do Teen Chaar’ will premiere exclusively on Amazon miniTV within the Amazon Shopping App on March 29. The show can be streamed for absolutely free on the service, with no paid subscription required.