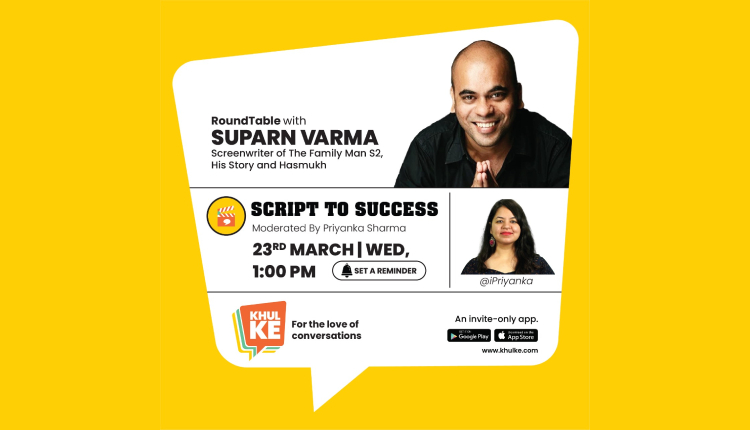 Writer Suparn Verma who is best known for his work in The Family Man S2, Ek Khiladi Ek Haseena and Zameen amongst others, spoke about his journey in the film industry and his upcoming projects including the much-awaited The Family Man S3 and The Shiva Trilogy at the RoundTable of the newly launched platform Khul Ke. Khul Ke, is touted at elevating conversations and is the only platform to allow video, audio and text-based conversations amongst moderator, panelists and audience. The panelist for its flagship feature, RoundTable was the renowned writer, Suparn Verma. This session was moderated by Priyanka Sharma.

Speaking about his upcoming project Suparn added, “I also have another exciting project The Shiva Trilogy to be directed by Shekar Kapoor which is in the scripting phase. We will take at least one year or more for pre-production and casting, but I’m really excited for it”.

The Family Man S2 have received rave reviews from the audience for Manoj Bajpayee’s performance and actors Samantha Ruth Prabhu’s hard-hitting portrayal of Raji. The audience since then have been eagerly waiting for Season 3, to which the writer of The Family Man, Suparn Verma revealed “Raaji will be alive and will kill Shuchi. The daughter will then avenge the death of Shuchi.” He then quipped “But this is my Fantasy Family Man series. I cannot reveal much about season 3 but yes, it is in production.”

Suparn Verma has delivered some critically acclaimed films in his 15 year career. Speaking candidly to Khul Ke about his journey he shared, “I started my career as a journalist which paved a way for my journey as a script writer and later as a director. As a director, I believe I’m nothing without my script writer. I aim to work with the best of the collaborators and believe in magic.” He also stated how Samantha Ruth Prabhu was always the first choice for the role of Raaji and how he enjoyed creating layers and perspectives for her character.

“While drafting The Family Man S2, we did not know what the response from the audience would be. We as writers write honestly without fear. Appreciation and criticism are a part and parcel of life. After the success of The Family Man, I am glad that people do not have to push for work for me and I have earned the right of refusal without any fear”, Suparn revealed.

Are Rithvik Dhanjani and Tridha Choudhury compatible for an arranged marriage? Watch their upcoming short film ‘Arranged’ that you can stream for free on Amazon miniTV

Blurry Slur to headline the ‘Framed’ Gig at antiSOCIAL, Mumbai on 26th March 2022