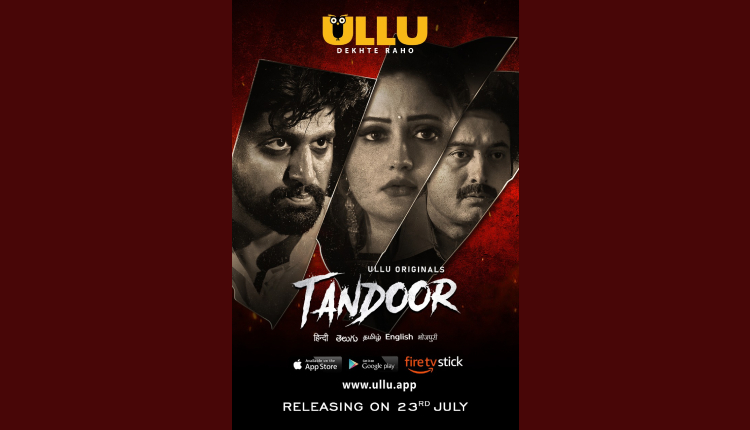 Gruesome, Heinous & cruel! These are the few words to describe a crime thriller like Tandoor on ULLU. Loosely inspired by an incident in Delhi, where a wife is allegedly killed by her husband in a Tandoor (Fireplace). Conspiracy arises when the husband flies leaving behind traces of the burnt body framing the hotel owner. The story flows into a variety of emotions and suspicions and it is a show for the audience to understand and realize the real truth of crime during the 80’s era.

Starring actors Rashami Desai and Tanuj Virwani in the lead roles, the series is directed by Nivedita Basu. Produced by ULLU Originals, the series’ ensemble cast includes Amit Riyan, Kamal Malik, Sonal Parihar, Shyam Mashalkar, and Ravi Gossain. The series since its teaser launch earlier garnered massive curiosity and has been highly anticipated amongst the audiences.

Commenting on the launch of the show, Vibhu Agarwal CEO ULLU quotes, “Launching a 2.0 version of ULLU has been a conscious decision. We wanted to target those topics which were lost somewhere out of sight. Audiences enjoy fictionalized real-life stories as it narrates stories of past or incidents which they have merely heard about. It is overwhelming that Tandoor has garnered so much attention & appreciation from the audiences. We thank the viewers and promise to keep entertaining them with engaging content”.

On the release of the show, Tanuj Virwani quipped, “The response & love that we have been getting for Tandoor has been astonishing. The audience is loving my camaraderie on-screen and off-screen with Rashami. Playing a grey character that too with a mind of a cruel killer was disturbing for me mentally but I wanted to make sure that I played my character with utmost sincerity. A phenomenal script, a good team, supporting co-stars, fun on the set, living the moment, that’s what an actor looks for in a show.”

Rashami Desai on making her digital debut says, “Honestly speaking I was very nervous for the launch of the show, I still am because the audience has seen an innocent side of me but now they will see me in a fearless avatar. It is really hard to sit with the right frame of mind while shooting for such a crime thriller. But it’s the harsh reality of the past and we as actors get the chance to portray these characters and bring out the past into today’s world. I was really blessed with the best team and co-stars and of course the platform ULLU which is trying to bring such incidents on screen.”

The series is co-produced by Chitra Vakil Sharma and Chandni Soni. Tandoor has released on 23rd July on the ULLU app.

LOMOTIF RINGS IN FRIENDSHIP DAY WITH THEIR LATEST CHALLENGE #DOSTIREMIXED