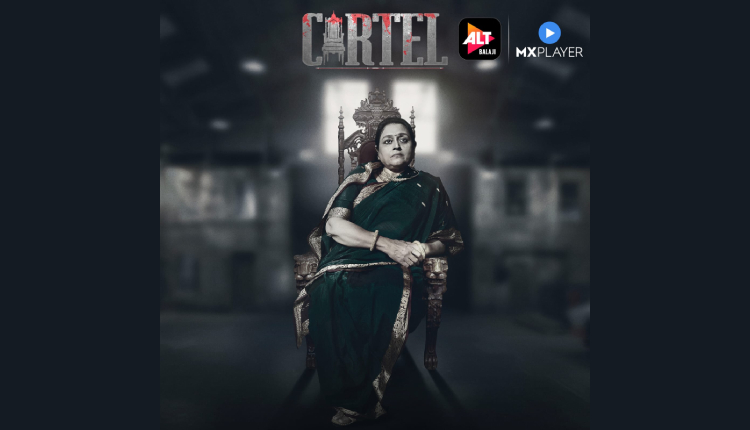 Veteran actress Supriya Pathak, best known for her work in Delhi-6, Toofan, Goliyon Ki Raasleela Ram-Leela, and many more films, will be seen as a Gang leader once again. For ALTBalaji’s upcoming action-drama Cartel, Supriya Pathak will be playing a matriarch of a mafia family once again. Rani Maai, played by the versatile Supriya Pathak, is the head of the Angre family, the most influential gang in Mumbai. After the death of her husband, she took over the Angre family’s businesses and rules with an iron fist. No one in Mumbai dares to defy her. Rani Maai’s principles stem from righteousness and love for all her children, even those that she adopted. However, Supriya Pathak, being the veteran she is, made sure that parallels were not drawn between the two characters.

Speaking about her character Supriya Pathak shares, “I am playing the head of a mafia family for the second time and I wanted to play it differently. Rani Maai is very different from Dhankor, so I had to make sure that it’s not repetitive. The walk, stance, and everything was very different from my previous character,”

She further adds, “Rani Maai is a compelling character. She seems to be controlling the entire Angre family and has a lot of say in the entire working of the family. She is very protective of her family, and at the same time very concerned about them. Rani Maai is a woman who has been fighting the man’s world. She is one of the exciting characters in the show.”

This is Supriya Pathak’s first collaboration with ALTBalaji. Since the show’s trailer has dropped, everyone has gone gaga over Pathak’s stint as Rani Maai – right from her nauvari saree look to her dialect. The show also features Rithvik Dhanjani, Tanuj Virwani and Jitendra Joshi amongst other 137 actors in the show.

The countdown for the show has already begun. The cartel will stream on ALTBalaji and MX Player Gold from August 20.

4 Most Simple Mealtime Hacks To Eat The Optimal Way