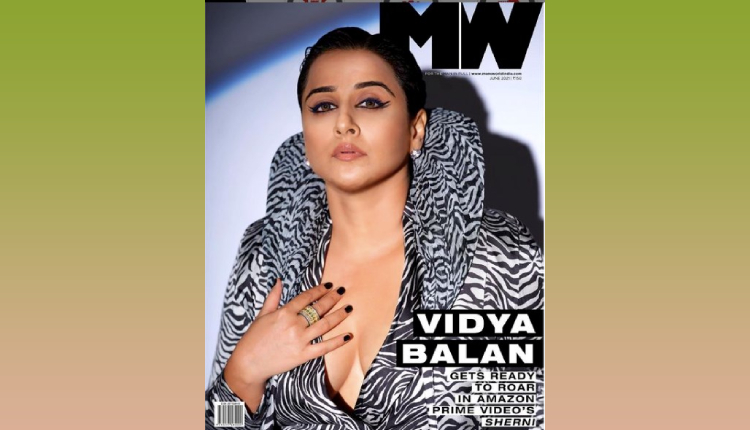 Vidya Balan is one actress who never ceases to impress us with every performance of hers. She adds life to every character of hers, starting from her first bollywood film ‘Parineeta’ to  ‘The Dirty Picture’, ‘Kahaani’, ‘Tumhari Sulu’, ‘Mission Mangal’ and ‘Shakuntala Devi’, she has proven time and again that she is undoubtedly one of the most versatile actress of Bollywood.

The actress is now seen on the cover page of ‘Man’s World India’ magazine June Issue where she is looking extremely hot and ravishing.

The official page of Man’s World India Magazine social account shared the cover page and wrote, “Our June 2021 cover star, Vidya Balan  is arguably the only actress who has been successfully shouldering projects as the solo lead for the last decade – and delivering superhits. With every film she chooses, she creates a wave in the industry. From picking quality scripts, to delivering big banner flicks, Balan is synonymous with versatility. The actress is getting ready to roar with Sherni, her new film on Amazon Prime Video , and is once again proving that she truly is unstoppable. ”

The actress who made an impressive bollywood debut with the film ‘Parineeta’ in the year 2005 has been adding list of some amazing roles to her career since then and now her fans are ready to see her roar in her next film Sherni which is releasing on Amazon Prime today.

On the workfront, her latest film ‘Sherni’ is now streaming on Amazon Prime. The film is about a forest officer who strives for balance in a world of man-animal conflict while she also seeks her true calling in a hostile environment. The film is directed by Amit Masurkar and also stars Mukul Chadda, Vijay Raaz and Neeraj Kabi.

GET A BOOST OF IMMUNITY WITH INNERgise

“I am shooting with my husband for an intimate music video in our bungalow”, Poonam Pandey