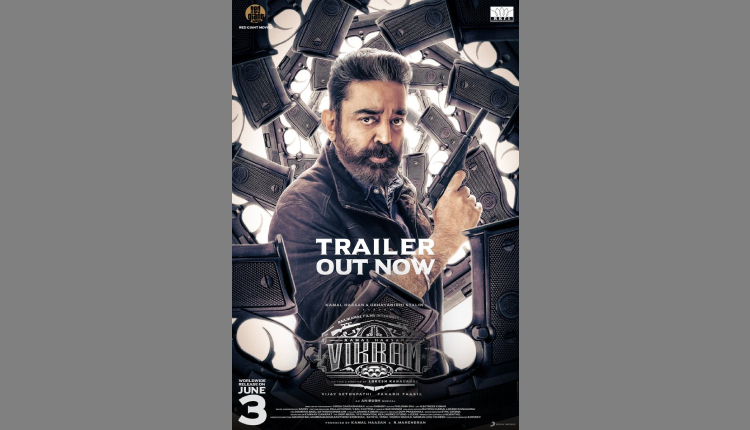 Superstar Kamal Haasan along with Vijay Sethupathi and Fahadh Faasil starrer Vikram, first official trailer along with entire music album is out and viral.

Directed by Lokesh Kanagaraj, also stars Suriya in a cameo role, promises to be a high-octane action thriller involving cops and gangsters.

Sportline of the film is not clear with the trailer, but it offers grand scale action, packed with guns, explosions and gangsters. The high-octane action-thriller, also stars Kalidas Jayaram, Antony Varghese and Arjun Das, among others.

The trailer introduces Vijay Sethupathi and Fahadh Faasil as two dons who have successfully maintained their terror in the shed. On the other hand, Kamal Haasan’s character is sought to be that of a mystery man, however, makes it unclear if he is a team of good guys or bad ones.

The trailer was released late last night, and it has already clocked 10 million views and counting, well within a day of its release. The film is bankrolled by Raaj Kamal Films International. The film is scheduled to hit theatres on June 3, 2022.

5 Best Features of Instagram You Should Know and Use