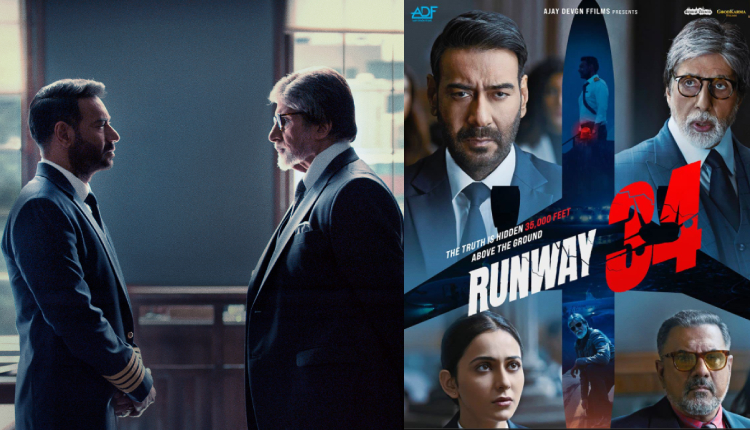 In an IMDb exclusive video, the cast of Runway 34 share their experience working on the film with Ajay Devgn as he juggles between being an actor and a director in the movie. The supporting roles played by Rakul Preet Singh and Amitabh Bachchan are in awe of his working style.

Amitabh Bachchan was amused by his skills and talks about how the entire experience of shooting with Ajay Devgn as a director was so unique. He also mentioned how during one of their shots, there were multiple cameras placed at different angles and Ajay Devgn would check every camera after the shot to ensure it was captured perfectly.

The other co-star, Rakul Preet Singh who has worked with Ajay Devgn in the past was surprised looking at the other side of the actor. She was amazed at how he was able to multitask between acting and directing while keeping a steady flow of thought. She added, “So Ajay sir would set up the entire shot and then he is in his casual set up…then he would immediately get into his uniform, and then action, and he would shoot, and then say ‘dikhao’. So, I was like how do you compartmentalise? How do you cut in and out?”

Ajay Devgn shared some insights on how he started the preparations for the movie, laid the groundwork during the pandemic and was able to hit the ground as soon as the lockdown ended in December. All the actors on set shared the same enthusiasm and to quote Amitabh Bachchan, he said, “I applaud him and want to congratulate him on how he has performed perfectly in all his tasks and the audience will see the results of this work in Runway 34”.

Here is what Ajay Devgn has to say about his journey as he steps in the shoes of a director for Runway 34 – https://m.imdb.com/videoplayer/vi1706672665