Will sprinter Sudha’s Race Swayamwar help her in bringing home gold? Watch Dhavak on Amazon miniTV from August 30 for free to know! 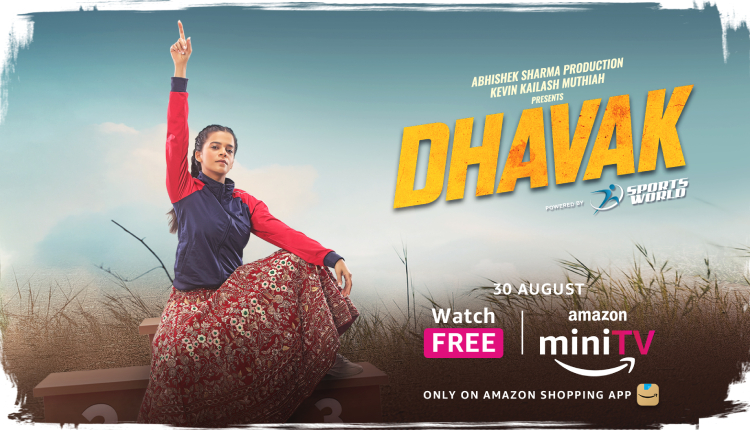 The captivating trailer gives a glimpse into the adrenaline-packed and inspiring storyline of this short film. We also get to see actor Srishti Shrivastava in a never seen before avatar. The story revolves around Sudha Singh (Srishti), a talented sprinter from Uttar Pradesh, who aspires to win a gold medal, but societal barriers stand in the way of her quest. The story takes a very interesting turn as a ‘Race Swayamwar’ decides her fate!

“Amazon miniTV is delighted to present its viewers with this unique, highly entertaining and relatable story with Dhavak,” said Girish Prabhu, Head of Amazon Advertising, “All of us are chasing our dreams to the best of our capacities and Dhavak is all about that! The talents onboard Dhavak and its strong plot make it for a great watch! The film streams exclusively on the service for absolutely free, starting August 30.”

“With Dhavak we wanted everyone to experience a commercial film which is honest and yet empowers people to dream,” said Abhishek Sharma of Abhishek Sharma Production. As the director & producer of the film he added, “Dhavak’s story will not just entertain our audience with all the quirks of a mainstream film but leave people enquiring about their own deep-seated conditionings. Through Dhavak we aim to inspire millions of girls across the nation to also identify and unapologetically race through their hurdles, both literally and metaphorically. We couldn’t have asked for a streaming service better than Amazon miniTV for Dhavak. It will premiere exclusively on the platform on August 30. We are confident and excited to see it reach seamlessly to the masses and resonate with all our audience.”

“I’m so honoured and glad to be a part of Dhavak. Sport films have always been very inspiring to me. They strive to make us aware about the current scenario and always leave us with a beautiful thought about the world we live in. I strongly believe that Dhavak will inspire women across the country, while driving home the point that dreams are achievable when you put your heart and soul into them,” said Srishti Shrivastava

Dhavak will premiere from August 30 on Amazon miniTV for Free, which you can find on Amazon’s shopping app and Fire TV.