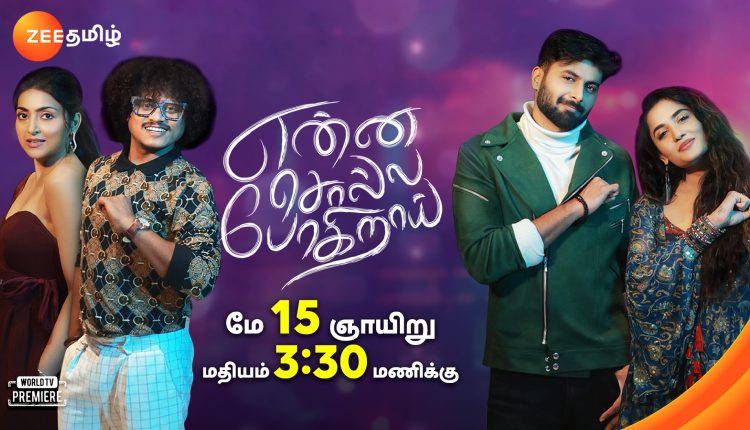 After kickstarting the Summer Bonanza of premiering 7 movies across 7 Sundays with Akhanda, Zee Tamil is all set to take the entertainment quotient to a whole new level this weekend. The channel has planned several surprises for its viewers this Super Sunday and it will be full of exciting content. The extravaganza starts off with a special episode of Rajini, followed by the heartwarming World Television Premiere of Enna Solla Pogirai and ends with the epic Super Queen Grand Finale.

The special episode of Rajini, which will air at 2 pm this Sunday on Zee Tamil, will be full of drama and excitement. In a surprising twist, Prathibanproposes to Rajini, leaving her speechless. Parthiban is the younger brother of Rajini’s best friend and hence, she finds herself in a fix. It will be intriguing to see if she accepts his proposal or not in this special Sunday episode!

After a dramatic episode of Rajini, the World Television Premiere of Enna Solla Pogirai will take viewers on a roller-coaster journey full of emotions at 3.30 pm on Zee Tamil. The movie follows the story of Vikram (Ashwin Kumar), who while trying to fulfil his fiancé’s wish, ends up falling in love with Preethi (Teju Ashwini). An unexpected love triangle ensues, and it will surely keep viewers glued to their TV screens as they try to find out who Vikram ends up with at the end!

The entertainment bonanza will shift gears in the evening as Ayesha, Sreethu Krishnan, Tejaswini, Parvathy, and Kanmani Manoharan battle it for the ultimate title of Super Queen. The epic grand finale, which will be aired from 6.30 pm on Zee Tamil, will also see popular music composer Yuvan Shankar Raja, actor Arya appear on the show as special guests and actor Ashwin Kumar as celebrity judge. While the celebrities will surely entertain the audience, it will be the exciting challenges and intriguing twists that will surely keep the viewers at the edge of their seats to find out who will take home the trophy.

So, what are you waiting for? Enjoy this Super Sunday full of entertainment with back-to-back entertaining shows from 2 pm to 9.30 pm, only on Zee Tamil