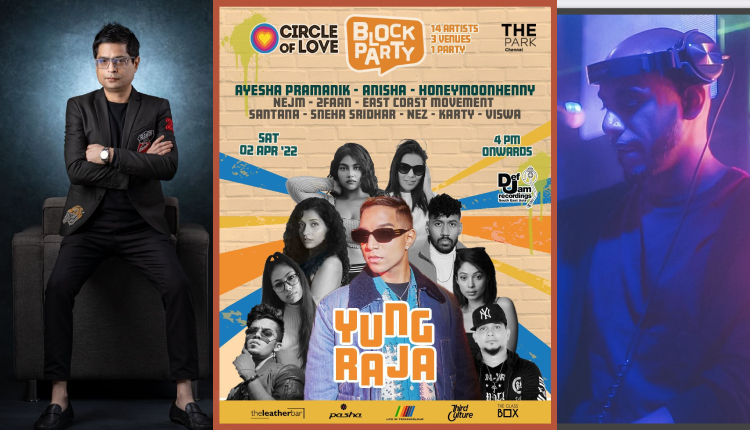 Yung Raja, who is known for bringing Western and Tamil musical influences into a distinct hip-hop style that has been appreciated worldwide, performed at The Park’s lobby from 4pm, which was followed by two more hip-hop acts and five DJs. This was followed by house and techno music at the after-party at Leather Bar, as well as commercial music performances at Pasha. The artists who performed at Circle of Love Block Party were: Ayesha Premanik, Anisha, Honeymoonhenny, 2 Faan, Nejm, East Coast Movement, Nez, Sneha Sridhar and Santana. They come from Chennai, Mumbai and Goa, and offer a taste of India’s diverse independent music scene.

Circle of Love was founded by Sameer Sethi, an award-winning entertainment innovator with over two decades of experience. Sethi’s work has included leading cultural events such as Sunburn, Sensation India, Filmfare Awards, Mirchi Music Awards, A. R Rahman Live, as well as international performances for artists including Anirudh. The platform is also spearheaded by Manny, renowned underground music expert and one of the most established DJs in India today.

Speaking on the platform, Sameer Sethi says, “Circle of Love was founded to create opportunities and a supportive network for indie artists across India. Over the last couple of years, we have steadily been building the community, and we are delighted to be offering this opportunity for audiences and artists to connect live. The presence of an international artist like Yung Raja further expands new possibilities for emerging artists, who get to showcase their talent alongside top names.”

Manny adds, “Despite having been founded shortly before the pandemic began, we have consistently put out some great initiatives that have gotten the word out about some of the best new music out there. This includes our Centre Stage series of performances that were recorded and produced when the lockdowns began, and our Circle of Love Festival in 2021 that featured over 20 artists. We have been associated with over 50 artists nationally, and the number only continues to grow.”

Speaking on performing at Circle of Love Block Party, Yung Raja says, “Inspiring the next generation of hip-hop innovators is something very close to my heart, and I’m excited about supporting up-and-coming Indian musicians by sharing this platform with them. It’s always a pleasure for me to perform in India, especially in Chennai, and I am looking forward to being back here and presenting my new work too.”