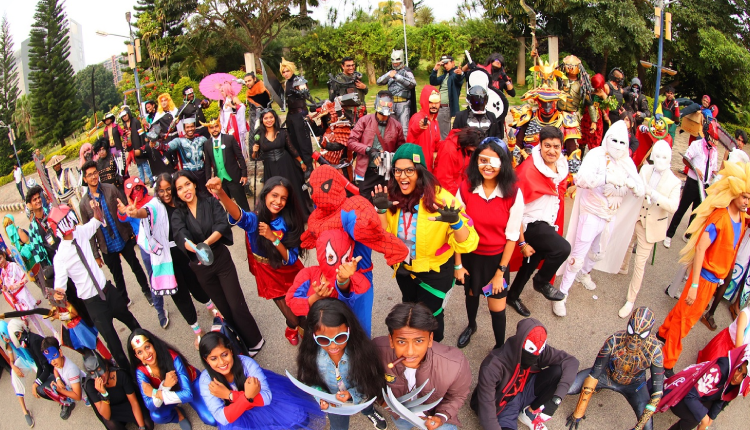 Comic Con India hosted its much-anticipated Maruti Suzuki Arena Bengaluru Comic Con powered by Meta and in association with Cruncyroll this weekend. Filled with jam-packed comics, artists, cosplayers, musicians and a whole lot of fun performances, the Bengaluru Comic Con which was held on November 19 and 20, 2022, concluded with the city coming together to celebrate pop culture at its best.

Attendees channelized their inner fandom to cosplay and put up their geekdom on display while others interacted and participated in tournaments, activities, among others. The 2022 edition witnessed the ever-expanding fandom and love for anime characters while a few brought back the classics. The performance line-up included our very own Bengaluru’s popular artist Siri who rocked the stage with her energetic voice followed by Bombay Lokal and Geek Fruit spread across both days. The audience was in awe of Illusionist Karan Singh’s magic. Finally, our beloved and very own comedians Sapan Verma and Raunaq Rajani left everyone in splits.

The convention featured a roster of comic book creators and publishing houses with special sessions at the arena for the attendees. Interactive session with Jonathan Kunz (Co-Creator of War and Peas) Raymund Bermudez, Holy Cow Entertainment’s book launch, Sumit from Bakarmax indulged fans through his journey, while Tinkle Studios and Amar Chitra Katha quizzed the audiences among many other engaging sessions hosted on the main stage.

Numerous manga retail experiences featuring Naruto, Death Note, Jujutsu Kaisen, and other popular series were on display for thousands of pop culture enthusiasts. The experiential zones had a Meta zone, Warner Bros zone and Universal Pictures’ Puss in Boots: The Last Wish gathered pop geeks in huge numbers that also got a chance to indulge in The Arena by Esports. Maruti Suzuki’s Arena had an experiential zone with a Virtual Reality experience for the crowd that indulged them in simulated driving in the future.

Comedian and writer Sapan Verma said, “It’s amazing how Comic Con India has completed 10 years. I myself have been associated with it for 4 years. This was my second year at Bengaluru Comic Con and the crowd was fantastic. It’s one of my favourite cities to perform at and amazing to see people of all ages enjoying through my 40 mins set here. I had a great time.”

Witnessing a sold-out show, Jatin Varma, Founder, Comic Con India, said “Our objective with Comic Con India was to bring the Indian pop culture community together and provide a platform to all enthusiasts to showcase their passion. It is surreal that we have completed a decade and are able to continue celebrating our fandom at this enormous scale. With the success of Bengaluru Comic Con 2022 which witnessed about 45K number of attendees over both days, it gives me immense hope for our upcoming Cons at Delhi and Mumbai as well!”

Maruti Suzuki Arena Bengaluru Comic Con powered by Meta took place on November 19 and 20 at the KTPO Trade Centre, Industrial Area, Whitefield, Bangalore. Delhi Comic Con will be held on 9th, 10th and 11th December 2022 and Mumbai will be on 11thand 12th February 2023.

ReWild, reconceptualising the luxury of vacation homes away from the city’s chaos