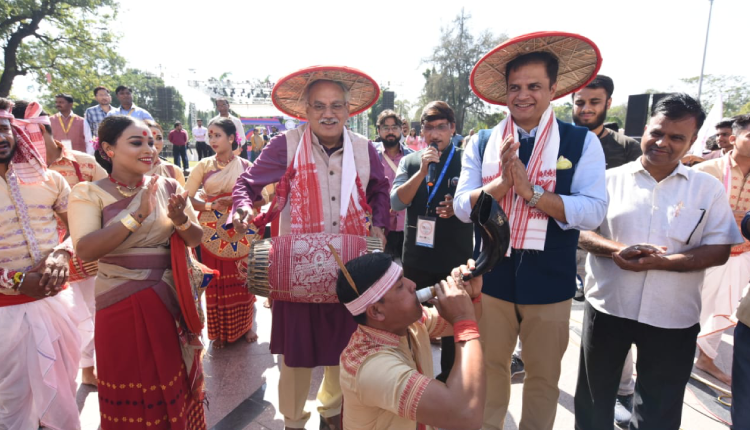 The much-anticipated and awaited Tagore International Art and Literature Festival, ‘Vishwarang 2022,’ has finally begun today. A glorious World Peace and Harmony Walk inaugurated the festival at Kushabhau International Convention Center (Minto Hall). Madhya Pradesh Governor Mangubhai Patel graced the fourth edition of Vishwarang as the Chief Guest. Meanwhile, Minister of State in the Ministry of Education of India Subhas Sarkar shared the dais with the Governor. The program was commenced by lighting the lamp to Guru Rabindra Nath Tagore’s famous song ‘Ekla Chalo Re’, written in 1905. Vice Chancellor of the University and Director General of Vishwarang, Siddharth Chaturvedi, and Director of Vishwarang, Aditi Vats, were also present. Today the Art and Literature Festival of Madhya Pradesh has become a world-renowned platform with 26 countries on board. After the pandemic, Vishwarang – 4th Chapter is taking place on a wide scale.

While applauding Vishwarang, His Excellency the Governor said, “Such festivals allow the future young generation to get the basic knowledge of art, culture, and literature. It helps in building a prosperous India. It is a unique confluence of languages, arts, and culture.” He further said such programs inspire youth to work for family, society and country.

Congratulating Vishwarang for including the tribals, the Governor said that the secret of eco-friendly life is hidden in the oral traditions of the tribal community. Vishwarang director Santosh Choubey urged to have global discussions, focusing on Hindi and Indian languages. Meanwhile, Pallavi Chaturvedi gave detailed information about the Children’s Festival starting from the second day of Vishwarang.

A unique World Peace and Harmony Walk initiated the much-anticipated festival at Kushabhau Thackeray International Convention Center (Minto Hall). The World Peace and Harmony Walk saw the participation of many art lovers, artists, and litterateurs. Apart from them, various artists across the world also walked the parade. On this occasion, ‘The Kristeni Group’ of Assam presented a mesmerizing Bihu Dance, leaving the audience in complete awe. Further, the parade inaugurated the ‘Exhibition of Sage Scientists of India’.

The Grand Launch Of Book Exhibition

The book exhibition was inaugurated on the evening of 17 November 2022 at the Kushabhau Thackeray International Convention Center premises as part of Vishwarang 2022. Vishwarang Director Mr Santosh Choubey, Gyanpeeth awardee Pratibha Rai and other dignitaries were present at the ceremony. On this occasion, guests unveiled the AISECT Group’s magazines Vishwarang Samvad, Vanmali Katha, Rang Samvad, Electronics for you, Vishwarang 2020-21 Coffee Table Book and other magazines.

On the occasion of the Tagore National Painting Exhibition, Director of Vishwarang and Vice Chancellor of Rabindranath Tagore University Santosh Choubey, author of the monograph and prominent art critics Vinod Bhardwaj, Leeladhar Mandloi, Jai Kishan, and Ashok Bhowmik launched the A. Ramachandran’s first monograph in the Hindi language.

Santosh Choubey said, “At the time of the pandemic, when art was taking a backseat, we decided to prepare a monograph on the living painter of India. Under which the first series features four monographs. Today we have launched the first monograph.”

“Indian culture is art oriented. Painting can fill new colours in life. The most popular form of artwork is painting. A painter tries to highlight every aspect of society through his painting. One cannot ignore its role in the development of life,” said Santosh Choubey, Chancellor of Rabindra Nath Tagore University, while the inauguration of the National Painting Exhibition. He further said that Rabindra Nath Tagore University is putting efforts to give impetus to various arts through Vishwarang, including painting. Painters from different states across the country participated in the exhibition. Vice Chancellor Santosh Choubey, Coordinator of Vishwarang Lilidhar Mandloi, and Siddharth Chaturvedi honoured West Bengal’s Sarabjit Maity, Rohtak Haryana’s Jyoti Berwal, Jalgaon Maharashtra’s Charandas Jadav, Mumbai’s Laxman Chauhan and Chandigarh’s Bhanu Srivastava by gifting them Vishwarang Momento.

The most sought-after singer and composer, Papon, gave an exciting performance at Vishwarang. The singer started with Rabindranath Tagore’s beautiful song ‘Ekla Chalo Re. ‘Moh Moh Ke Dhage,’ ‘Kaun Mera,’ ‘Prem’s Theme,’ ‘Tu Jo Mila,’ and more soothing compositions were a part of his compelling concert. The audience certainly couldn’t get more of the star singer.

Vishwarang Day 2 will have the best of both intellectual and cultural sessions. The Tribal Literature and Art Festival will also commence. On the other hand, the second evening of Vishwarang will host a Mushaira.

Celebrate Thanksgiving dinner with your family and friends at On the Rocks, Crowne Plaza Chennai Adyar Park