The finest celebration of all things Street, SneakinOut is back and bigger than ever! 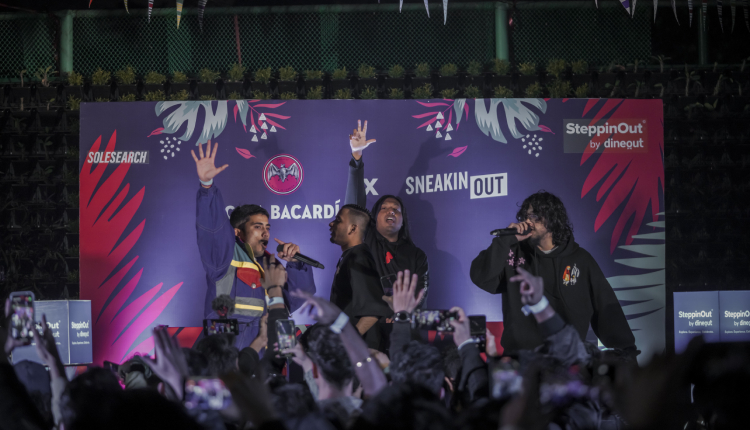 SteppinOut and SoleSearch, in association with Royal Enfield, has returned with the second season of SneakinOut – the largest nationwide festival celebrating the rising trend of streetwear, sneakers and hip hop culture. After the immense success of the first edition of the festival, the party is back and is expected to be bigger and better than ever before. The pan India cultural experience will be held across 9 cities, from 7th August to 16th October 2022.

Along with the biggest curation of sneakers & streetwear seen thus far, from the finest homegrown as well as international brands, the pop culture extravaganza will also host an elite line up of over 100 exhibitors from around the country. Farak, VibeTheHype, KNN Calcutta, Helios and Sneakarc are just some of the brands showcasing their line of products. The festival will also feature performances by some of the top music artists in the country and host other exciting activities like auctions, gaming zones and a whole lot more. One can battle it out at the gaming area, with fun-filled activities like beer pong, flip the cup, dance offs, rap battles and more.

Once a global fad, sneakers are the newest yet the most everlasting fashion trend right now. The rise of sneakers can be traced back to the 1900’s. Initially made for sports, Sneakers have now taken a different route and are a style statement today. Worn by performing artists, athletes & others, Sneakers are now an aspiration. Top brands from across the world are now stepping into the diverse range of Sneakers as they are not just perceived as a mere part of one’s outfit but they define a person’s personality.

To cater to the tremendous rise of street culture and sneaker enthusiasts in the country, “We are delighted to be bringing back SneakinOut 2.0; an event that is an exhilarating experience in itself, from start to finish. Apart from being a dream destination for sneaker addicts, it is an inclusive escapade for anyone who is fascinated with learning about street culture, or simply enjoys immersive experiences,” said Safdhar Adoor, Business Head of SteppinOut.

“SneakinOut has quickly become the country’s most happening cultural event that recognizes the booming growth of sneakers and streetwear. With 9 massive experiences across 9 Indian cities, the anticipation for the tour among the nation’s youth says everything you need to know about the fashion & cultural choices of today’s generation. With SneakinOut, we aim to build an ecosystem where the world of street & hype culture becomes accessible, while blooming into a flagship youth culture activation that progressive brands can invest in.” said Abhishek Bardia, Head of Marketing at SoleSearch.

Partnered with brands like Royal Enfield, Casa Bacardi, Jimmy’s Cocktails and others, SneakinOut 2.0 is all set out to be a perfect haven to celebrate the biggest culture uprising across the country. It is the ultimate gathering for the sneaker, streetwear and culture communities to learn and celebrate their mutual love. It is a festival that one absolutely cannot miss, not just for sneaker lovers but for everyone who simply loves fashion.

SteppinOut owned by Dineout was recently acquired by Swiggy, the country’s leading on demand convenience platform. With the acquisition, Swiggy is now offering an omnichannel experience to its consumers.

The ticket prices are as follows: