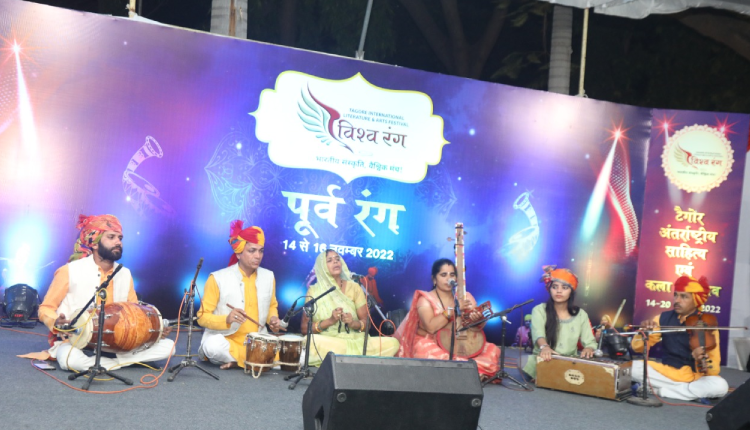 The second day of the fourth chapter of Vishwarang witnessed a program in the loving memory of Annapurna Devi. Her disciple and the nation’s renowned flute player Nityanand Haldipurkar and well-known playback singer Chhaya Ganguly were present at the event. While the Program officer of the Indian Ministry of Information and Broadcasting, Chitra Sharma, facilitated the program, an art thinker-critic Vinay Upadhyay hosted the same.

Meanwhile, playback singer Chhaya Ganguly said she got associated with Annapurna Devi during her early college days. Calling Mother Annapurna Devi as Sur Tapaswini, she hailed the time with her ‘Satsang’.

For the unversed, Annapurna Devi was a master at playing Surbahar, a musical instrument. Apart from this, she was well-known for her recitation of Malkauns Raag. Many note that during her performance, the trees outside the house used to shake vigorously. The nation’s famous flute player Hariprasad Chaurasia and sitar player Ravi Shankar were Annapurna Devi’s disciples, among many.

The second session of Tagore International Literature and Arts Festival, ‘Vishwarang-2022 – Day 2,’ dissected a unique and memorable topic through a panel discussion. The subject was ‘The Dharma Of Music’. Giving the audience a beautiful insight into the same were Dhrupad singer Umakant Gundecha, playback singer and AIR presenter Chhaya Ganguly and music scholar-composer of Lata Surgatha, Yatindra Mishra. Meanwhile, Santosh Choubey participated in the discussion as the chairman. Mr Leeladhar Mandloi hosted the session at the request of Vinay Upadhyay while he anchored the main event. Both the conductors asked well-rounded questions to the speakers, allowing the audience to understand the depth of the vital topic, ‘The Dharma Of Music’.

In the session, which ran for about one and a half hours, Yatindra Mishra said that the Dharma of music is to give us a lot of patience and humility. He also added that music should provide a place to better ourselves and inspire us to be happy. While recalling personalities like Pannalal Ghosh, Tansen, Haridas, Abdul Karim Khan, Pandit Nikhil Banerjee, Swami Vivekananda, Ramakrishna Paramahansa, and Bismillah Khan, Chhaya Ganguly said that music is the attainment of God and spiritual consciousness.

Meanwhile, Umakant Gundecha opined, “music has no religion. It is only a medium. Dharma belongs to the doer. The most important thing is the intention with which the musician is composing music. Only that would bring out the musician’s true nature.”

The main attraction of the evening was the presentation of Ramayana by Shriram Bhartiya Kala Kendra based on Goswami Tulsidas’ Ramcharitmanas. The artists performed the main episodes of Ramayana through dance drama. The mega-performance included folk dandiya, Indian classical, and tribal dance. Ram’s birth, Tadka Vadh, Sita Swayamvar, Kaikeyi Vardan, Surpanakha, Sita Haran, Shabari Bhakti, Lanka Dahan, Ram-Ravana Yudh, Sita Agnipareeksha, and Shri Ram’s coronation, among many other episodes of Ramayana were enacted on the stage. The highlight of the show was the representation of Ravana through Kathakali dance.

“It’s this very exciting and fun-for-audiences adventure of a wedding that we know is going to go wrong,” says actor Dustin Milligan on his upcoming Prime Video’s film The People We Hate At The Wedding