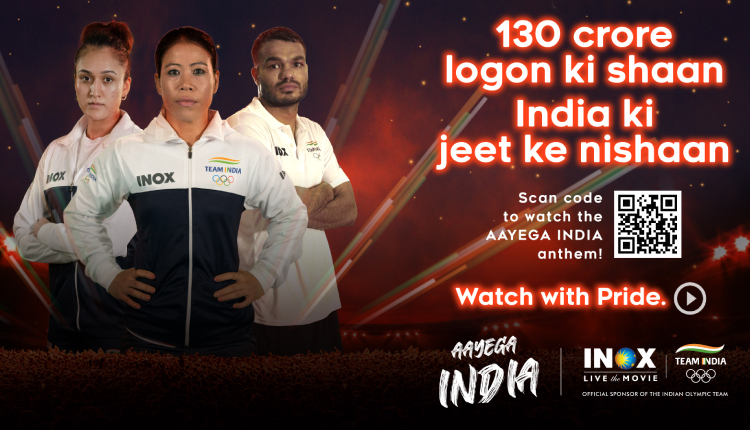 As the Official Sponsor of the Indian Olympic Team, INOX Group today unveiled the ‘Aayega India’ campaign to support and cheer Team India at the Tokyo 2020 Olympics. The campaign featuring Boxers MC Mary Kom & Vikas Krishan Yadav along with Table Tennis player Manika Batra honours the unflinching and unwavering pride prevalent in the hearts of billions of Indian sports fans who firmly believe that “India will arrive” at the big stage – Tokyo 2020 Olympic, scheduled from 23rd July till 8th August 2021. While narrating the sentiment of an Indian fan, who feels as much a part of Team India, as the athletes themselves, the campaign also pays rich tributes to the athletes’ resilience & the determined spirit to succeed against all odds, and be the shining light that inspires the country towards a happier and brighter future.

INOX Group is associated with India Olympics Association (IOA) as an official sponsor of the Indian Olympic Team to the Olympic Games Tokyo 2020. Speaking about the launch of the campaign, Mr Siddharth Jain, Director – INOX Group said, “When it is about Olympics, there is a tremendous sense of pride, which gets awakened in the hearts and minds of every Indian. With our campaign Aayega India, we aim to take this emotion to an all-new level. It is an honour for Brand INOX to have athletes like Mary Kom, Manika Batra and Vikas Krishan Yadav, featuring in its campaign, and we are grateful to them. With the anthem, we aim to let Team India know that the entire country takes pride in all their endeavours and stands with them as they set themselves up for this momentous event. We are proudly looking forward to the Indian contingent scaling new heights at Tokyo 2020.”

The ‘Aayega India’ anthem, conceptualized and developed by EBC Originals, is produced in Hindi, Tamil and Telugu languages and is rolled out on the social media handles of INOX Group’s ventures, INOX Leisure Ltd, INOX Air Products and INOXCVA.

INOX Group has always been at the forefront of the promotion of sports in the country. In the recent past, the Group has worked towards supporting various sporting events, teams and leagues in the field of Table Tennis, Football, Badminton, Running, Basketball and Cricket, and building awareness among the masses through effective promotional initiatives.