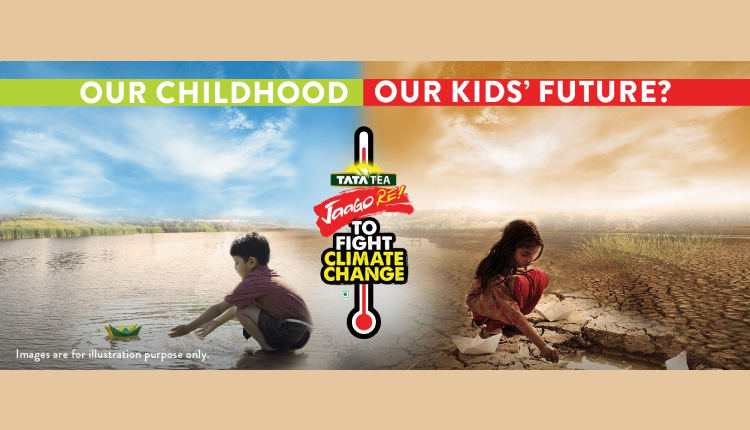 Tata Tea today launched its latest edition of #JaagoRe, aimed at spreading awareness on a cause which is the most defining crisis of our time – Climate Change.

Over the past few decades, the implications of climate change have been unprecedented. According to a report by Save The Children[1] in 2021, if the Earth continues to get warmer at the current rate, children born in last decade and after will witness more heat waves, floods, droughts, and wildfires than earlier generations. A similar report by UNICEF[2] states that approximately 1 billion children live in countries classified as ‘extremely high-risk’ due to climate change.

This makes it critical for us to fight climate change if we want to protect the future of our children.

Over the years, Tata Tea’s #JaagoRe initiatives has become a clarion call for social awakening tackling key issues with the brand and platform, inspiring and facilitating genuine changes within the society. With the current edition, Tata Tea #JaagoRe aims to explain how Climate Change impacts a normal citizen and highlights how it will affect our future generations. By making it personal and relatable it hopes to inspire people to make small behavior changes and take simple actionable steps together, that can help us in fighting climate change and hence make this planet better for the future of our children.

In its 15th year, the Tata Tea Jaago Re platform with a new TVC, brings back acclaimed actor Pankaj Tripathi who was a part of the first ever Jaago Re communication. Created by Mullen Lintas, The TVC is releasing on World Environment Day (5th June). It showcases the fact that while a few degrees of heat can disrupt the comfort in our home, we may still be callously apathetic about the rapid climate change the world is witnessing evidently through weather disruptions like soaring temperatures. Jolting us to wake up and acknowledge climate change, the key message of the film is delivered through the lens of a child, thereby serving as a pressing reminder for all parents to act now against climate change, lest it becomes too late to protect the future of our children.

Most of us reminisce our childhood which had its fair share of outdoor activities, however as parents we are concerned to send our kids to outdoors because of rising temperature, polluted environment etc Hence with the proposition that ‘Apne Liye Nahin Toh …Apne Bachon Ke Future Ke Liye Jaago Re’ , the TVC highlights the fact that climate change is all pervasive, affecting families across all stratas of society. The film implores all citizens to come forward and pledge their support to help fight climate change by contributing through small everyday actions. A microsite (Jaagore.com) allows individuals to pledge their support along with providing information on small everyday actions that one could take in the fight against climate change.

Commenting on the initiative, Puneet Das, President – Packaged Beverages (India & South Asia), said, “Tata Tea Jaago Re has always been synonymous for evoking social issues by not just initiating conversations but also ensuring due actions. Power of Jaago Re lies in unleashing the action taken by the common man that can collectively trigger a larger societal change. While climate change and its negative impacts have long been discussed, it is critical to understand how children are rendered the most vulnerable in this context. The current edition of Tata Tea Jaago Re is based on the most basic parenting insight of protecting our children and ensuring that we do everything to give them a better future. Hence it encourages parents and individuals to take smaller actions like opting for sustainable energy methods, recycling materials, all of which can result in a safer and better planet for the next generation to inhabit”.

“Jaago Re, in its 15th year comes back with Pankaj Tripathi, who starred and debuted in the first Jaago Re commercial as a politician, this time for an important topic that needs immediate action and attention for the sake of our children’s future. The starting point is a simple insight of the discomfort we all feel with the slightest temperature change, but are apathetic to the change in temperature of the planet. In this launch phase of the campaign, Pankaj plays the antagonist succumbing and accepting climate change as something that’s “happening”, not realising if nothing is done, what it’s real impact on the future generations will be, and it is them that’s pleading for action by this generation to fight it, for their sake. The stridency and urgency of the issue seen through a child playing the protagonist of the campaign, for the first time.” adds Garima Khandelwal – Chief Creative Officer – Mullen Lintas

Log on to www.jaagore.com to know more on guidelines to extend help and to pledge your support.