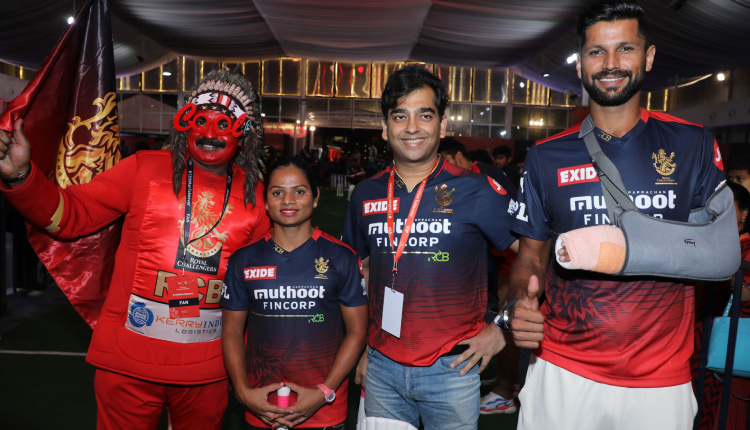 Royal Challengers Bangalore fans on Thursday scripted a new GUINNESS WORLD RECORDS® feat for completing most runs between the wickets in an hour at #12thManTakeover, organised by Wings Events and powered by sportswear giant PUMA at Jayamahal Palace in Bengaluru.

A huge group of 187 RCB fans came together to establish a new official record as they completed 823 runs between the wickets on a 22-yard cricket pitch set up at the venue.

Royal Challengers Bangalore were the first T20 team to be placed in the Top-10 list of the most popular teams in the world on social media. RCB and its official kit partner PUMA have consistently focused on creating curated experiences for fans. This time, they have taken it to the next level and created a world record in the presence of the top Indian sports personalities—Dutee Chand and Rupinder Pal Singh.

“PUMA has always believed in connecting fans with sports culture by creating personalised experiential events for them. We are committed to engage and serve our consumers in the best possible way. It was great to see cricket fans come in such a huge number to set this new world record. The atmosphere was quite electrifying, and we are glad to get fans on a single platform for this initiative,” said Abhishek Ganguly, Managing Director, PUMA India & Southeast Asia.

On the occasion, Rajesh Menon, VP and Head of Royal Challengers Bangalore, said, “From the jersey to the stands, we always want to bring our 12th man army closer to the game. We are glad to see our partner PUMA bringing this philosophy alive through one of its kind, a unique on-ground activation on the 19th of May in Bengaluru.”

India’s star sprinter Dutee Chand kickstarted the official attempt for the world record with the first run and was joined by fans, who contributed runs for the feat.

“It was great to be part of this event. I never imagined such a record could be created on a cricket pitch. It was heart-warming to see so many fans unify for this sporting event,” said Dutee.

Popularly known as 12th Man Army, the RCB fans wore the team’s jersey along with cricketing gear while securing the record.

“Fans always play a crucial part in sporting journeys and having loyal and passionate fans is always a blessing for any sportsperson or a team,” Indian hockey team drag-flicker Rupinder said.

With this world record, fans celebrated the team’s impressive run in the on-going cricket season ahead of their final league match against Gujarat Titans tonight as RCB look to secure a playoffs berth. The cricket carnival concluded with the fans enjoying a host of personalised activities curated around RCB memorabilia with a simulated dressing room and Instagrammable zones.