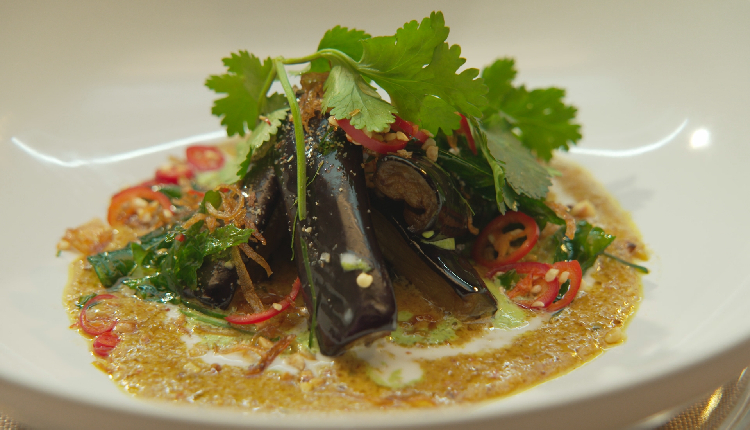 Presented with a feature ingredient service challenge, season 10 MasterChef Australia winner, Sashi Cheliah, served one of his restaurant’s top sellers in the second episode of MasterChef Australia: Fans & Favourites. Hoping to serve Sashi Cheliah’s team a curveball, the opposing Fans team decided on Eggplant to be the featured ingredient. However, this tactical move served right into the alley of the chef who is also known to be a curry auteur. With the help of teammates Julie Goodwin, Tommy Pham and Michael Woods, he whipped a delectable Kathirikai, a spicy and crispy eggplant curry from Tamil Nadu served with cumin rice and coriander chutney to serve 40 diners. Considering it a challenge that put his restaurant’s reputation at stake, Sashi Cheliah leveraged his pro-skills to upgrade a well-known dish. His creation was labelled a ‘luxurious upgrade’ to eggplants by judge Melissa Leong while Andy Allen called it perfectly balanced for its “massive punches thrown in from individual garnishings”. By showcasing a proud classic South Indian dish for global viewers, Sashi Cheliah showed the world what he does best; cook decadent curries that bring fireworks to one’s taste buds.

3 Dishes to Prepare from Sour Milk