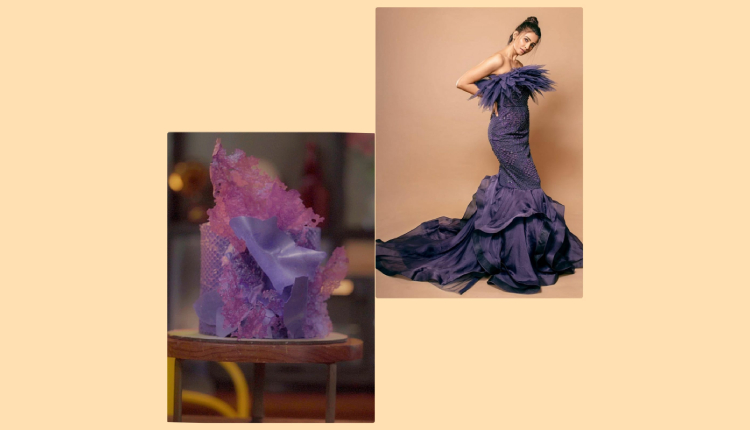 Taking inspiration from beautiful outfits and recreating their intricate design elements on a wedding cake, is a trend that’s quickly catching on. Gobble, popular Food & Lifestyle channel has been one of the early adopters to catch onto this, starting a brand new series called “Celebake”. Baker Priyanka is seen combining her love for fashion and baking in this series. The latest episode features actor Daisy Shah as the celebrity guest, who is seen challenging the baker to create a stunning wedding cake based on one of her recent red carpet looks.

Since the cake is inspired by Daisy’s outfit, the baker has named it “Purple Daze”. The purple, mermaid style red carpet outfit had a ton of ruffles and frills to which the baker has done due justice by recreating it with edible elements, giving the Wedding Cake that exceptional look. Daisy was pleasantly surprised to see how commendable the cake turned out keeping in mind all the minute details of her attire.

Daisy revealed that “Food and fashion are two things that are extremely close to my heart. I dig all things comfortable and personally don’t like experimenting or going overboard with my looks.” She also added that green and purple monotones have always caught her attention and thus challenged the baker to recreate her purple-red carpet outfit that was originally created by Fashion designer Amit GT.

Apart from discussing her love for food and fashion, Daisy revealed that she will be seen in the movie “Mystery of Tattoos” alongside Arjun Rampal and Amisha Patel, followed by a few music albums. She is also in talks with a few producers and will potentially be signing web series too!

Fresh From The Oven ; D’Oliva Brings To You The All New Detroit Style Pizza And Much More!

Baking in the limelight: Meet the pastry Chefs Kunal Arolkar and Shailesh Bhutada on…

What Dish Can You Prepare from Leftover Veggies?