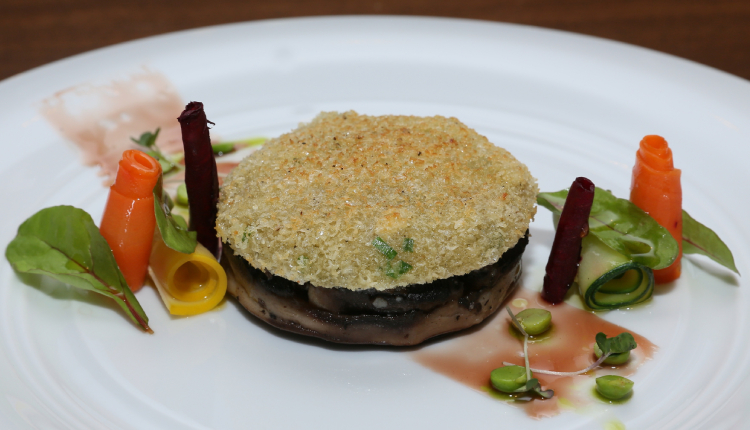 Lasagne is made of stacked layers of pasta sheet alternating with fillings such as Ragu’/ Ragout. Lasagne originated in Italy during the Middle Ages. The oldest transcribed text about lasagna appears in 1282 in the Memoriali Bolognesi “Bolognesi Memorials” in which lasagna was mentioned in a poem transcribed by a Bolognese notary. The first recorded recipe was set down in the early 14th-century Liber de Coquina. Recipes written in the century following the Liber de Coquina recommended were walnuts. In Ancient Rome, there was a dish similar to a traditional lasagne called “Lasana or Lasanum” for ‘container’ or ‘pot’ described in the book by Marcus Gavis, but the word could have a more ancient origin. The first theory is that lasagne comes from Greek “Laganon”, a flat sheet of pasta dough cut into strips, it is still used in Greek to mean a flat thin type of unleavened bread baked for the holiday

We at Westin Goa, curate such bonnet from the early midnight catch at Anjuna. Chef Ravish Mishra has guided the lines to perfection and blended the fresh flavours to attain the Umami for an ambrosial experience with a twist worth craving for, changing the old flat sheet concept keeping the original 1282 concept of “The Pot / Container” giving a modern fine dine twist. The combination of sourness from Westin-grown specially carved seeds cuts the mild richness of the cheese with the addition of sharpness and nuttiness from the fresh berry vinaigrette. The perfect blended superfood at every doorstep from Westin Goa.

Place the mentioned mushrooms in the work bowl of a food processor, reserving the Portobello whole. Pulse until chopped into pieces no larger than 1/4 inch, 8 to 10 short pulses. Melt butter in a large skillet over medium heat. Add assorted mushrooms and cook until softened, 3 to 5 minutes. Add shallots, garlic, and thyme and season with salt and pepper. Reduce heat to medium-low and continue cooking, stirring frequently, until mixture is dry and starting to brown, and 15 to 20 minutes. Add white wine and Worcestershire sauce. Increase heat to high and cook, stirring, until no visible liquid remains, approximately 1 minute. Remove from heat and stir in Scarmozza cheese and a bit of parmesan. Season to taste with salt and pepper. Transfer mixture to a food processor or blender and process until smooth. Transfer to a plate and spread into a thin layer. Transfer to refrigerator to cool completely.

Beat the egg and water together in a small bowl. To assemble the lasagne, brush the egg over a sheet of pasta. Drop the filling mixture on the dough by a teaspoonful about one inch apart. Cover the filling with the top sheet of pasta, pressing out the air from around each portion of the filling. Press firmly around the filling in shape. Fill a pot with truffle sauce baking it with fresh parmesan. Reserve cutting it roundel in the shape of Portobello.

Shock-blanch the whole Portobello cups, add the butter in a large skillet over medium heat. Add shallots, garlic, and thyme and season with salt and pepper. Reduce heat to medium-low and continue cooking, stirring frequently, until Portobello is dry and starting to brown.
Cook covered until the gratinate and the filling is hot about 3 to 5 minutes. Finish by making truffle emulsion with the rest ingredients and salt. Bake with the parmesan on top and reserve.

Make a Hazelnut crumble with oil, hazelnut, and parmesan. Making a crisp Touille’.

Impress your loved one this Valentine’s Day with Marriott Bonvoy’s all-encompassing offerings!