PT Usha: 7 facts we bet you didn’t know about the ‘Queen of Speed’ 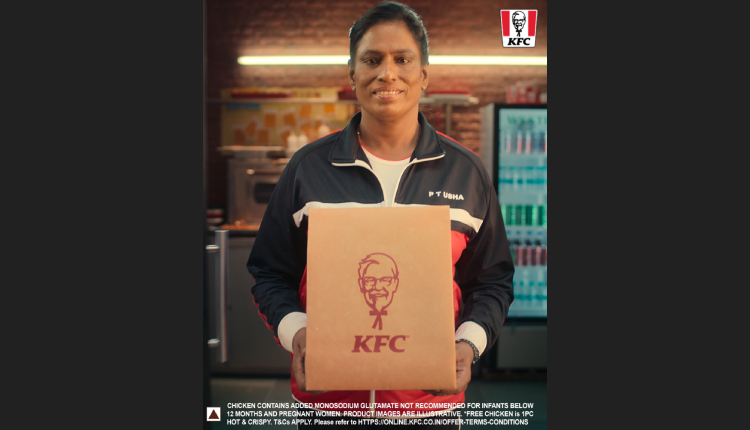 PT Usha, the undisputed queen of the track and field, is a sports icon and an inspiration to many. Known for her humble beginnings, determination and hard work, PT Usha has won hearts across the globe. She was recently spotted in a never-seen-before avatar featuring in a KFC campaign film, to launch their new Express pick-up service with a 7-minutes promise.

In the film she doubled-up as a high-speed chef, preparing and packing an Express pick-up order in 7-minutes. Because when it comes to speed, who better than PT Usha to launch an express service!

And like the KFC 7-minutes promise, here are 7 quick things we bet you didn’t know about the Payyoli Express:

She defeated all the boys she practiced with: When PT Usha was young, and had just started training, her coach would try to make her practice with boys younger than her, but most of them would refuse to run against her, because most of the time she ended up beating them.

How she won her first national race is quite the story: PT Usha attended her first ever national championship in Trivandrum, and she was competing in the under 14, 100m race. At the starting block, the athlete to her left false started, which was marked to PT Usha as a foul and this happened one more with the athlete to her right, because of which she was disqualified from the race. But since she wasn’t at fault, and the audience raised a hue & cry about this, the race had to be repeated, which of course she won! No harm, no foul indeed.

Speed is her mantra – even when it comes to cooking: Speed is something we invariably associate with PT Usha, but did you know she’s equally fast in the kitchen? PT Usha loves cooking and is quite the talented chef. When in the kitchen, she loves cooking, especially recipes from Kerala, and can fix a full-fledged meal within merely 30 mins. This includes fish curry, vegetable curry and fish fry or chicken fry, rice with papad. *Mind blown*

PT Usha loves fried chicken: Not many may know, but the Golden Girl of India loves KFC’s Hot and Crispy Chicken. When travelling overseas for international competitions, PT Usha preferred eating at KFC, as it was easy to find in new locations, and felt familiar. In fact, she has always been fond of KFC, and a fan of its signature taste and also appreciates how easily accessible the brand is. Even now, when travelling abroad, she seeks out a KFC for a quick bite of her favourite chicken.

Gardening is her jam: From running through the lush green landscapes in Kerala, to nurturing some of her own plant babies. PT Usha is a plant parent and loves to do some gardening when off the track.

She’s inspiring many girls around her to realize their dreams to win medals for India: PT Usha started her all-girls sports academy called Usha School of Athletics, in 2002 in Balussery, Kerala. Since then, the academy has produced two Olympians and won 79 international medals to this day.

The one word that drives her that she would like young athletes to build into their dictionary for success: As one of the most celebrated, and legendary athletes in the country, her advice for youngsters and young athletes boils down to a singular word – Focus. She strongly believes that to never lose focus is to win. Working hard and staying dedicated to the dream that one has set out to achieve with pure focus, is her key to success.