The Fabulous Beer Gardens and Pop-Up Parks in Philadelphia 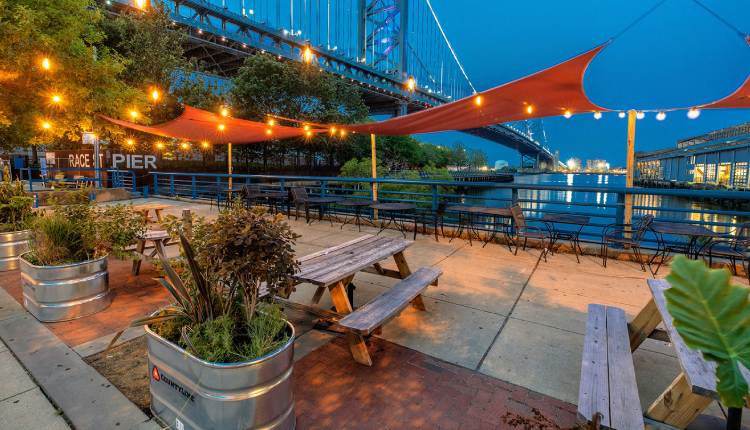 Philadelphia loves its pop-up beer gardens and its love affair with beer goes back to those gritty colonial days when George Washington and Thomas Jefferson were plotting revolution over tankards of ale in Old City. On International Beer Day, whether you’re in the mood for a litre of draft beer or looking to enjoy a local brew at a waterfront hammock garden, here is a list of Philadelphia’s pop-up beer gardens and parks to sip alfresco beers and enjoy the varied entertainment zones this season.

Spruce Street Harbor Park is a one-of-a-kind urban oasis located on Penn’s Landing along the Delaware River waterfront. This seasonal, family-friendly park offers countless ways to unwind during the summer. This pop-up has over 50 colourful hammocks hung throughout, providing plenty of shaded areas to relax along the waterfront. Games like shuffleboard, beanbag toss, and life-sized chess line the boardwalk, as do much food and drink vendors such as French Toast Bites, Chickie’s and Pete’s, Philly Taco and Dre’s Water Ice and Ice Cream. If you’re a beer drinker or love cocktails, check out the floating beer garden, where you can cool off with a beverage while or suspended over the Delaware River on strong net lounges. The park takes on a magical vibe in the evening thanks to hundreds of multicolour LED lights strung on the branches of trees. You can enjoy the attractions in the park annually, May through September.

Blue Cross RiverRink Summerfest is Philadelphia’s premier outdoor skating rink, located just north of Spruce Street Harbor Park along the Delaware River waterfront. In addition to skating, the park offers games, amusement rides, and mini-golf. Entrance to the park is free, and the rides and attractions are pay-as-you-go. The large Lodge offers ample indoor dining space and is home to several local food vendors, such as Chickie’s and Pete’s, as well as a station serving local craft beer and cocktails. In the winter months, space is transformed into Winterfest – a waterfront wonderland outfitted with fire pits, cosy cabins, and a large ice-skating rink.

The Garden at Cherry Street Pier

The pop-up experiences along the Delaware River continue north to Cherry Street Pier — a former municipal pier that has been transformed into a year-round riverside destination, featuring artist studios, pop-up markets, rotating exhibitions, live performances, and other events. At the eastern end of the pier is The Garden pop-up dining room which requires advance reservations, set beneath the open-air roof of the pier and looking out onto the river with breathtaking views of the nearby Benjamin Franklin Bridge. Operated by FCM Hospitality, the pop-up features a menu of snacks, salads, sandwiches and sweets, with cocktails and draft beer on tap, as well as can beer, wine, and non-alcoholic beverage options.

You can enjoy a beer, snacks, live music and films under the stars at the Haas Biergarten, operated by La Peg, which offers views of the Delaware River and the Benjamin Franklin Bridge as it soars overhead. After spending time outside, you can head indoors for comedy, improv and other contemporary, genre-defying performances hosted by FringeArts.

Parks on Tap is a travelling beer garden that occupies different park spaces throughout Philadelphia in the spring, summer and fall. In addition to craft beers, this family-friendly park party features wine, snacks, and non-alcoholic drinks — plus comfy chairs, hammocks, and games like Jenga and corn hole. You can sit back and relax while enjoying the natural beauty offered by the over 10,000 acres of green space found throughout Philadelphia. The program rotates between dozens of locations around the city, such as FDR Park in South Philadelphia and the Fairmount Park Horticulture Center in West Fairmount Park. A portion of the proceeds from Parks on Tap benefits the city’s parks.

The Pennsylvania Horticultural Society’s two Pop-Up Gardens transform vacant lots in different Philadelphia neighbourhoods into lush outdoor dining and drinking spaces filled with blooming flowers, plants and trees. The PHS Pop-Up Garden at South Street can be found at the corner of 15th and South streets in the Graduate Hospital neighbourhood and features a beautiful pergola in the centre, with food and drink vendors off to each side and plenty of seating throughout.

The new PHS Pop-Up Garden at Manayunk fills a spacious parcel of land just off of Main Street with over 2,200 varieties of plants and trees – including a decades-old olive tree that was featured in 2020’s Philadelphia Flower Show – a working garden filled with vegetables and herbs, and an ample amount of outdoor seating. At both gardens, you can expect botanical-themed cocktails and a rotating selection of food from local restaurants, such as Cantina Los Caballitos and Khyber Pass Pub.

Terrace on Tap at The Liberty View

This lively beer garden from chef and restaurateur Michael Schulson fills 20,000 square feet of space across the street from the Liberty Bell Center, allowing imbibers to relax while admiring views of Independence National Historic Park. Independence Beer Garden operates year-round and features 40 taps of local, regional and domestic craft beers, as well as an assortment of cocktails and wine — all served within a rustic, open-air space designed with reclaimed wood, distressed metals, and twinkling lights. You can enjoy an approachable menu of snacks, salads, and sandwiches, such as a cheesesteak, pretzel bites, wings, and tacos, as you challenge your friends and family to games of Jenga and corn hole.

Now operating year-round at an 18,000-square-foot space across from LOVE Park at 1500 JFK Boulevard, Uptown Beer Garden is a perfect destination for visitors and conventioneers searching for an open-air dining and drinking experience just steps from downtown hotels and the Pennsylvania Convention Center. The new location features seven different seating areas and is decorated with trees, twinkling lights, local street art, a koi pond, and a fountain made from recycled beer taps. Food comes by the way of a giant food truck in the central garden, with a menu including Philadelphia favourites — including roast pork sandwiches and cheesesteaks — as well as other sandwiches, snacks, salads and desserts. Libations include nearly two dozen beer options in addition to seasonal cocktails and wine.

This German-themed concept from award-winning restaurateur Stephen Starr is open year-round for pretzels, bratwursts and one-litre boots of brews. In the spring and summer months, their spacious outdoor beer garden is the place to be and be seen. Thirsty visitors alike can sit at large picnic tables and get lost in conversation over a spirited game of Jenga or competitive round of ping pong.

Oval+ On the Parkway

The Oval+, or what’s also referred to as the “Park on the Parkway,” occupies eight acres of public space along the Benjamin Franklin Parkway, providing outdoor fun for all ages in the summer. The Oval+ has a seasonal beer garden that serves up cold beers and wine under a canopy of trees and festive lanterns. Plus, there is a rotating roster of food trucks, so you’ll want to come hungry. During the day you can enjoy mini-golf, outdoor yoga and a buzzing schedule of fun, family-friendly events.

Had A Blast Shooting With Akshay Kumar Says Vaani Kapoor