KARAN JOHAR IS BACK WITH YET ANOTHER MATCHMATCHING PLATFORM ‘DESIVIDESIJODI.COM’, LEAVES THE AUDIENCE DIVIDED 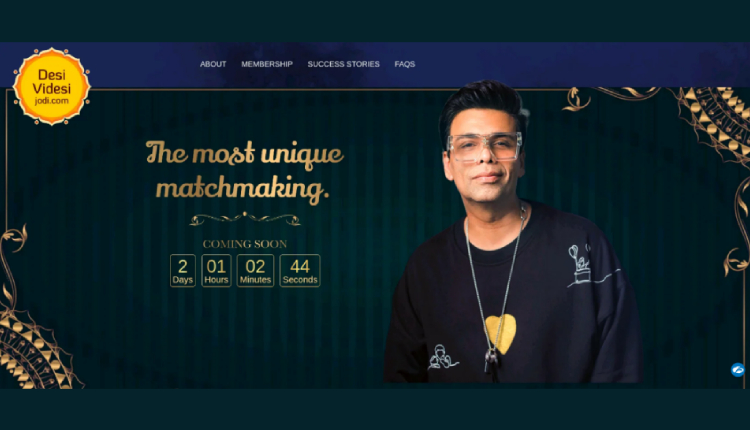 The successful producer, reality TV judge and social media star recently took to Instagram to introduce his latest venture – desividesijodi.com – a unique matchmaking platform designed specifically for desi and videsi matches. Famously known for his magnetic portrayal of love overseas, the eccentric chat show host has even recently gone on record to claim that his current show has become the ultimate hotspot for finding and ‘manifesting’ love.

As the countdown to the launch of the unconventional matchmaking website begins, the announcement received mixed reactions from the public. Karan’s dear friend and famed Bollywood director, Farah Khan was quick to comment on his reel post, saying “Why can’t u matchmake you n me?? Now thats a match made in heaven 😂”.

Many users are encouraging the ‘east meets west’ angle with comments like “A desi-videsi match-making website? I guess my time has finally come” and “Ab isko boltey hai good newwz! Is there a trial version of this?”, while others wary of what Karan has in store. They’ve shown their doubts by commenting “Don’t say that the matchmaking app is for celebrity kids only!”, “Desi aur videsi? Seems like you’re inspired by your own films!” and “Just why? India main ladke kam pad gaye the ki matchmaking mei bhi bideshi lane the?”

Will the arrow shot by this cupid land successfully this time? Only time will tell as his fans eagerly wait for what’s coming for desis looking for love amongst global Indian diaspora. Let’s hope that this “shaandaar” attempt by KJo ends up with some “dilwales” meeting their “dulhanias”!

The Healthiest Breakfast of the Nation You Can’t Ditch: Idli & Sambar