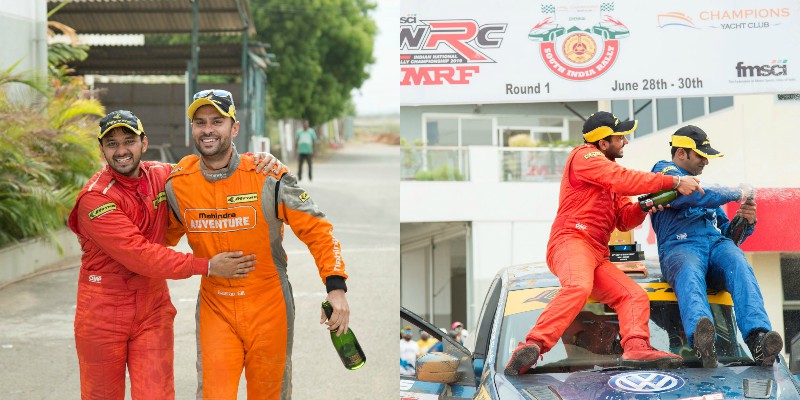 Going into the third and final leg with a 10-second overall lead and a handy 1.41 minutes over Gill, Mascarenhas (Shruptha Padival) would have hoped for a pressure-free day in the office. But an errant car and a possessed Gill saw his lead being steadily wiped out from both ends, raising the specter of a sensational last-minute upset.

However, Team Mahindra’s Gill (Musa Sherif) who finished second in the day’s first stage and won all remaining four, suffered a massive blow in the penultimate stage. Just as he was racing like the wind, a herd of cows came in his path, costing him anything between 7 to 10 seconds.

He was awarded 10 seconds by the Stewards for the unfortunate delay, catapulting him to the third position in the overall category. It was sufficient to win him the INRC category too but not good enough to dislodge Mascarenhas or Fabid Ahmer.

Rahul Kanthraj (Vivek Bhatt), however, was edged out of the podium in the overall category by a mere one second.

“We worked very hard to make up for the lackluster first two days,” Gill said. “We changed the tyres and the setup at every opportunity and it paid dividends until bad luck hit us,” he added.

Gill’s JK Tyre partner Mascarenhas was, however, delighted with his breakthrough victory. “My car had lost one of the four cylinders on Saturday itself and it kept stalling, adding to the pressure. I however held my nerves and came through, making this one of my sweetest wins,” he said.

The South India Rally, Round One of the INRC powered by MRF, turned out to be a thrill-a-minute blockbuster, with the 19-strong Team Champions stunning all and winning almost all the categories.

Dean and Fabid Ahmer (Sanath G) made it a sensational 1-2 for the Shubhakar Rao-owned team, with Dean also taking the INRC 2 and Fabid the INRC 3. Vaibhav Marate (Arjun SSB) annexed the INRC 4.