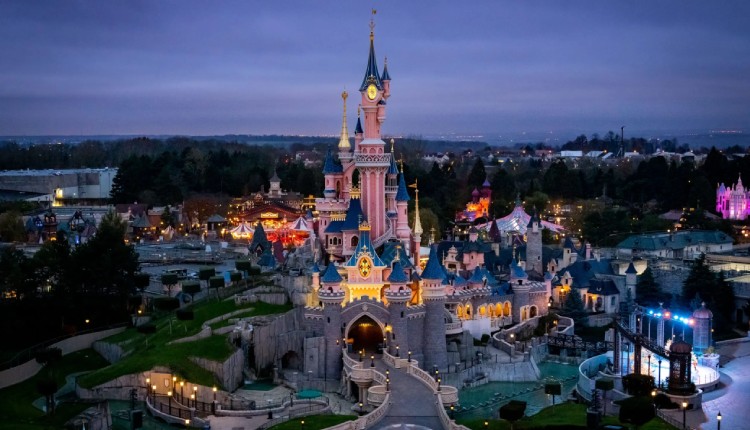 Planning a perfect winter travel? Look no further! Whether you are looking to spend magical moments with family, an unforgettable getaway with friends, or even a romantic weekend, Disneyland Paris is the ultimate destination to experience the holidays.

The holiday season at Disneyland Paris has already begun with Disney Enchanted Christmas and it will last until January 8th, 2023! And this year, the Magic of Christmas is even stronger as part of the 30th Anniversary celebrations, sure to amaze guests of all ages.

As soon as they enter Disneyland Park, guests are entranced by the majestic tree that stands 24 meters high! With Christmas music, garlands and snowflakes flying in the air… an enchanting atmosphere envelops the area surrounding Main Street, U.S.A. And at nightfall, there is even more magic in the air at Disneyland Park!

This magical show combines fireworks, dancing fountains and Christmas songs, along with projections of scenes immersing Guests into the worlds of Disney Classics, such as Frozen and Pixar movies, such as Toy Story!

The show is even more dazzling and elevated for this special year, as a touch of innovation has been added to it! Sleeping Beauty Castle’s rooftops are even more magical thanks to a brand-new LED* technology that uses much less energy, while making it possible to create new effects that have never been seen before in a Disney Park and that are synchronized with the show!

The highly anticipated “Mickey’s Dazzling Christmas Parade” has also returned. This parade – which first debuted in 2021 – aims to deliver a unique experience to Guests. It notably features five colorful floats that celebrate the magic of winter! These floats are synchronized with music and feature Mickey and his friends, along with Disney Princesses and Santa Claus*. In total, almost 100 performers, Disney Characters and float guides participate in this Parade, which runs several times a day for Guests’ enjoyment. The performers’ costumes – which have been specially designed for the occasion – enhance the atmosphere on Main Street U.S.A.

*Featured in the parade until December 24th, 2022 inclusive

Many iconic Disney Characters are decked out in their most beautiful Holiday costumes to pose for unforgettable pictures and spend heartwarming moments with Guests. Ho ho ho… Santa Claus has also joined the celebration before taking off in his sleigh for his big annual trip around the world!

Mickey, Minnie, Donald, Daisy and Goofy celebrate the magic of Christmas carols several times a day on Videopolis® stage with the musical show “Let’s Sing Christmas!”. This year, Minnie also has a special surprise in store for Mickey and Guests, as she performs a cover version of a famous song entitled “All I want for Christmas is… Mickey” during the show.

The Magic of Christmas extends to other locations, as each Disney Hotel is adorned with Christmas decorations. And this year, Marvel artist Skottie Young designed an outdoor work of art specifically for Disney Hotel New York – The Art of Marvel. The artist has created a 1.4-meter-high Christmas ball ornament featuring an amusing drawing of Baby Groot. This ornament will be displayed at the hotel’s entrance throughout this Christmas season. A small-scale version of it will also be sold at the hotel’s shop at a price of €90.

Guests also have the opportunity to experience the Magic of Christmas through Disneyland Paris’ food and beverage options, as well as within Disney Parks and Hotels.

This season, L’Hiver Gourmand has also returned to Walt Disney Studios Park. This authentic winter market consists of stylish chalets that serve gingerbread, crepes, hot chocolate, and other delicious treats. Four new chalets have been added – three of them have been installed for the first time at Disneyland Park!

Finally, what better place than Disneyland Paris to plan out your Holiday décor, Christmas gifts and outfits? A wide range of products are available in the many shops of the Parks and Disney Village, in particular in the magical Boutique du Château, which is exclusively dedicated to Christmas ornaments.

Celebrate New Year’s Eve and make unforgettable memories at Disneyland Paris’ amazing and festive party, which will take place in the heart of Disneyland Park on December 31st, 2022. The program will include a fireworks display, access to emotion-packed attractions, the participation of Disney Characters, exclusive shows and many other 30th Anniversary-themed surprises… From 8:30 p.m. to 2 a.m., the New Year’s Eve Party will make it possible to close out 2022 in the best possible way at Disneyland Paris.

The Christmas season is one of the most anticipated times for our guests, as Disneyland Paris makes it possible for them to enjoy unique moments with family and friends in a magical atmosphere. In this time of tension over energy, and in line with its commitment to reducing its environmental impact, Disneyland Paris is gradually implementing a series of measures that seek to reduce its energy consumption, such as adjusting the heating of the various indoor areas to 19 degrees Celsius (*) or turning off the Parks’ lights during closing hours**. These measures supplement the long-standing initiatives that have been taken to limit energy consumption and use renewable energy, resulting, for instance, in the extensive use of LED lights across the resort – 75% of our hotel facilities and 70% of our attractions are equipped with LED lights in guest-facing areas –, along with the construction of one the largest solar canopy plants in Europe, the use of geothermal energy and the insulation of buildings when they are renovated or built. Informing and raising awareness among our 16,000 cast members is also a key pillar of our approach.

(**) Except for maintenance, cleaning, and construction operations

Some experiences, shows or events will not be available or may be modified depending on the changes in health and safety measures and recommendations from public authorities.

7 Things to do in February

5 Best Couple-friendly Resorts in and Around Kochi

5 Fun Places in Chennai to Chill Out with Friends