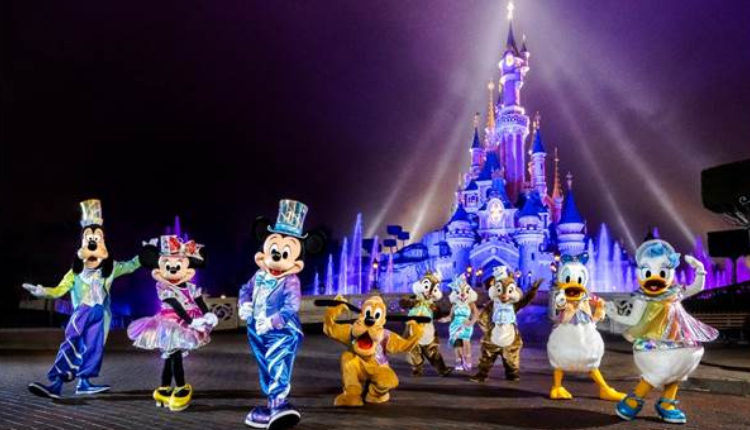 Disneyland Paris turns 30 this year and the theme park has unveiled the details of the grand celebration, including, new decors, new costumes, new shows, its first-ever aerial drone show and a fashion collaboration with Stella McCartney… transporting guests into the new era of Disneyland Paris.

April 12, 1992, marked the historical opening of Disneyland Paris, the kingdom of dreams and magic that has been enchanting guests of all ages for 30 years. Having hosted more than 375 million visits*– and having innovated and offered new experiences many times – Disneyland Paris has created unforgettable memories that live inside each of us and become Europe’s top tourist destination.

In honour of this historic milestone, a new era will start on March 6, 2022, and there’s plenty for Disney fans to get excited about.

The creation of unique shows is part of the DNA of Disneyland Paris: Mickey and the Magician, The Lion King: Rhythms of the Pride Lands or Disney Junior Dream Factory are examples of successful shows that contribute to making our Guests’ experience magical.

For the 30th Anniversary of Disneyland Paris, a new show will be performed every day – several times a day – on Central Plaza at Disneyland Park, in front of Sleeping Beauty Castle which is more beautiful than ever following its 12-month refurbishment.

Consisting of three themes that celebrate the power of laugh, passion, and dreams, it will feature more than 30 Disney Characters and dancers with new colourful floats and a unique soundtrack.

It will be an opportunity to see Mickey, Minnie, Donald, Daisy, and their friends decked out in their new iridescent costumes, as created especially for the 30th Anniversary. Many other Characters who have marked the history of animation will join them, including the Genie from Aladdin, Princess Rapunzel, and Jessie and Woody from Toy Story, just to name a few.

To give you a sneak peek of the new costumes designed for this celebration, Disneyland Paris organized its own fashion show as part of which Mickey, Minnie and their friends “hit the catwalk” in a one-of-a-kind setting.

At nightfall, a new spectacular emotional moment will be offered for guests before one of their favourites shows Disney Illuminations. Called Disney D-Light, this new pre-show will combine video projections, illuminated water jets, lighting effects, mist, famous Disney songs, and above all, drone choreography to bring an additional touch of Magic around the iconic Castle, that has been renovated for the occasion. Filled with special effects, the different scenes will transform the Castle as never before.

To kick off the celebration and for a limited time, a light and an air show featuring 200 drones* – designed with the assistance of European expert Dronisos, an Official Technology provider based in Bordeaux – will be performed so as to end this new nighttime pre-show in an unforgettable way. These synchronized drones will form a sparkling figure “30” in the sky right above Sleeping Beauty Castle, while the new theme song created for the 30th Anniversary – “Un monde qui s’illumine” – will be played in the background. The soundtrack was recorded with a symphony orchestra at the famous Abbey Road Studios in London, and arranged in a different way for this pre-show, to make it even more emotional.

It will be the first time a Disney Park uses drone technology as part of a daily outdoor show above its Castle. This innovation is a new step forward in the development of experiences that are always more immersive and spectacular for Disneyland Paris Guests, where technology paves the way for emotions!

The First Ultrachic Pantsuit For Minnie Mouse At Disneyland Paris, As Designed By Stella McCartney Herself!

For the 30th Anniversary of Disneyland Paris, Minnie called upon the services of British designer Stella McCartney to create her first pantsuit to be worn at Disneyland Paris.

“I am delighted to be working with the one, the only, the iconic Minnie Mouse. I have designed a custom outfit for her in celebration of the 30th Anniversary of Disneyland Paris. Minnie has always had a special place in my heart. We share the same values. What I love about Minnie is the fact that she embodies happiness, self-expression, authenticity and that she inspires people of all ages around the world. Plus, she has such great style! I wanted Minnie to wear her very first pantsuit at Disneyland Paris, so I have designed one of my iconic costumes – a blue tuxedo – using responsibly sourced fabrics. This new take on her signature polka dots makes Minnie Mouse a symbol of progress for a new generation. She will wear it in honour of Women’s History Month, in March 2022. I can’t wait for you to see this new look at Walt Disney Studios Park!”, said Stella McCartney.

The 30th Anniversary will also mark the highly anticipated opening of the new theme-based area Avengers Campus, which is an integral part of the transformation of Walt Disney Studios Park. Starting Summer 2022, Super Heroes from the MARVEL universe will gather at Avengers Campus. They will invite Guests to embark on a brand-new epic journey consisting of heroic adventures and missions to fulfil, thereby extending the immersive experience in the MARVEL universe, that started with the opening of Disney’s Hotel New York – The Art of Marvel in 2021.

In addition to the entertainment program developed especially for the 30th Anniversary, guests will be able to enjoy the existing experiences with their family or friends. They will be able to experience more than 50 attractions – whether they are thrill-seekers, passionate about adventures or enchanted journeys – there are attractions to suit all tastes. “Selfie Spots” to interact with Disney Characters, and many shows such as Mickey and the Magician (performances will start in spring/summer 2022), Disney Junior Dream Factory, Disney Stars on Parade (which made its big comeback early January 2022 after being suspended for nearly two years) will always be a part of the celebration, just like Disney Illuminations, which will immerse Guests in Disney, Pixar, and Star WarsTM stories, from the past and the present!

Disneyland Park will be home to entirely new Gardens of Wonder comprised of 10 different theme-based gardens. Installed in front of Sleeping Beauty Castle, the gardens will feature 30 entirely new art pieces, kinetic Disney and Pixar sculptures which will “come to life”. They will celebrate nature, embody the diversity of popular Disney and Pixar Characters, and offer an enchanted promenade for our Guests.

Each of these pieces has been imagined thanks to the expertise and creativity of our Landscaping and Entertainment teams and is produced by local craftsmen whose know-how has contributed to the Disneyland Paris experience for many years. Inspired by various sources of influences: from windmills for children to the world of Salvador Dali, among other things – these 30 pieces of art will be installed in 10 different theme-based gardens and will represent a wide variety of Disney and Pixar Characters, from Princesses to Villains. For example, the Garden of Asia will include sculptures of Baymax (Big Hero 6), Mushu (Mulan) and Sisu (Raya and the Last Dragon).

Food & Beverage Options That Celebrate The 30th Anniversary As Well

At Disneyland Paris, the food and beverage experience also contributes to the Magic! For months, our chefs have been passionately developing and testing new dishes to complete this unique Anniversary. As of March 6, 2022, and as part of the celebration, Guests will be able to enjoy more than sixty tasty dishes with new vegetarian options including a vegan panini and a salted mashed potato waffle, delicious desserts, and exclusive cocktails. Table-service restaurants will feature iconic new desserts developed by the pastry team, composed of chefs, sous chef and commis, who works in the inside-Disneyland Paris’ pastry Les Délices de Minnie. It includes a white chocolate and strawberry cake served under a dome called “Le Bouquet final”, and all-you-can-eat buffets will feature a new 30th Anniversary-themed macarons assortment that will be a feast for the eyes and a delight for the taste buds of guests of all ages. The Disneyland Paris barman team, has, on his side, created exclusive drinks, such as the pink “Happy Birthday Cocktail”, or the “Smoothie with a twist” composed of blueberries purees, banana and coconut, or even the blue “Enchanted Flute”.