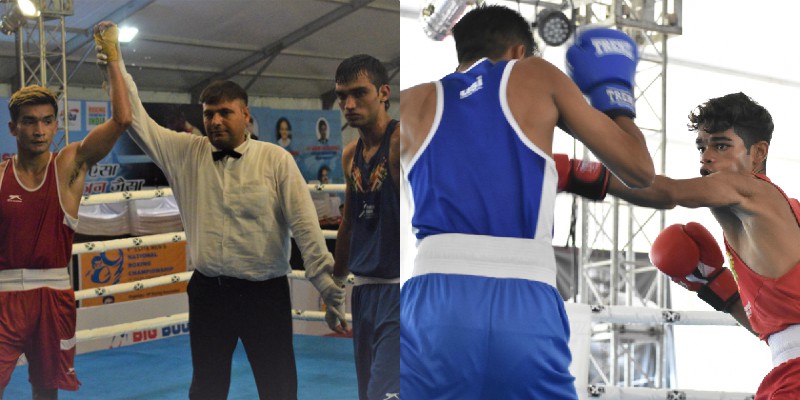 While the day witnessed 80 bouts with the first bout registering an upset as President’s Cup gold medallist Neeraj Swami (49kg) lost 1-4 to Vinod Tanwar. Swamy, the Delhi boxer just couldn’t find his rhythm in the first round against opponent, a Southpaw from the Services.

Vinod took advantage of his height and reach to take the experienced boxer off guard though Neeraj did manage to make a comeback in the second round with a series of hooks and punches. However, the action-packed bout concluded with Vinod landing more clean punches in the last round and getting the judges’ decision in his favour.

Shiva Thapa (63kg) after failing to make a cut in the World Championships team earlier in the year, is participating in the fourth edition of the Nationals with a quest to win the Championship. He won his bout with a convincing 5-0 margin over Hitesh Kumar of Daman & Diu. Shiva controlled the proceeding right from the beginning though gave one count in the third round on his way to victory.

In the welterweight category, Naveen Boora of Services sprang a huge surprise as he defeated last year’s runner up Dinesh Dagar 5-0 in a one-sided clash.  Dinesh who won a gold in President’s Cup, Indonesia this year just couldn’t cope with the flurry of hard punches from the youngster. Naveen dominated in all three rounds to get a unanimous decision and pocket a comfortable win.

Chandigarh’s Pankaj Chauhan (75kg) won his bout against Arunachal Pradesh’s Jomohtacho 5-0 in a dominant fashion and continued his winning streak. In 81 kg pre-quarter match, statemate Kuldeep Chauhan dominated over Chattisgarh’s Abhinav Nandy from the beginning and landed a flurry of punches forcing the referee to stop the contest in the first round.

Services boxers had a field day as Commonwealth games bronze medallist Mohammad Hussamuddin (57kg) started on a slow note against Uttarakhand’s Pawan Gurung but eventually found his rhythm to win the bout with a 4-1 victory.

In the middleweight category which stood out to be the best bout of the day, Rohit Tokas from the Railways and Vanhlimpuia of Services played a close bout. Makran Cup Bronze medallist Rohit had moved up his weight from 64 kg to 75 kg took time to gauge and adjust against his opponent’s strategy only to demolish him in a 4:1 split verdict.

Standing up to Stigmas