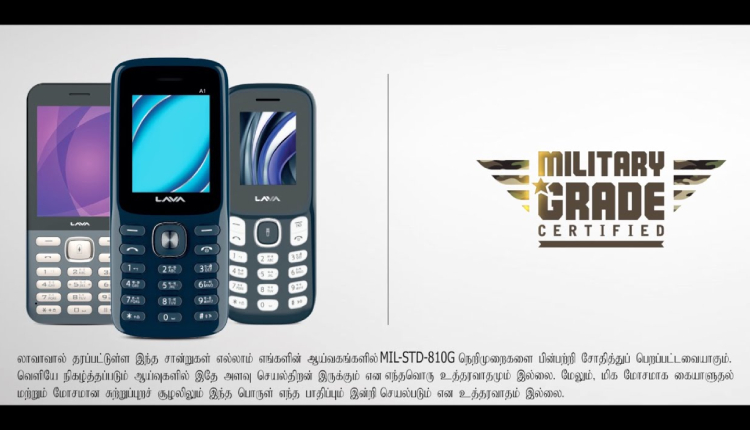 Indian mobile handset brand Lava international limited has announced the launch of its latest TVC for its military-grade certified phones. The emotional film is a tribute to the armed forces who endure the toughest conditions to serve the nation. The TVC highlights the toughness of Lava phones and how it is the phone of those born with an unbreakable spirit. It appeals to the tough part in us and inspires us to remain motivated. The TVC draws a similarity between the making of a commando and Lava phone- both of which go through the most stringent training/testing process to become the toughest.

Conceptualized & executed by 82.5 Communications, the film captures the life of a young cadet who goes through rigorous army training and is on the verge of giving up. The Lava phone gifted to him by his father serves as an inspiration for him to stay tough and eventually become a Commando.

Explaining the concept behind the campaign, Mugdh Rajit, Head- Marketing and S&D Strategy, Lava International said, “We aimed to push through the point that our phones are tough and can survive the bravest of environments and conditions. We chose an Army backdrop as it was the best way to show our military-grade phones. Just like Army Commandos can survive the toughest conditions, the campaign illustrates how our phones can withstand such conditions easily. Our phones are sturdy and are equipped with powerful a battery which is extremely important in the Indian context.”

The film has been rolled out on select TV channels.

Speaking about the film, Sumanto Chattopadhyay, Chairman and Chief Creative Officer, 82.5 Communications, which conceptualised the film, said, “To advertise a mobile handset that’s military- grade, we decided to make a film that’s ‘military-grade too. We want the viewer to feel the stress and strain the protagonist, a cadet goes through in order to appreciate the toughness needed to survive it. The toughness, which the Lava phone possesses, serves as an inspiration to the cadet to stay strong.”

Preeta Mathur, Group Creative Director, 82.5 Communications said, “It’s an emotional film made by a brand that’s proudly Indian and conceived by an agency that’s all about ingenious Indian ideas. It is our tribute to all the wings of the armed forces that live the tough life for India. The essence of the film is: Khaas unke liye jo kabhi toot-tey nahi. It talks to the ‘tough’ inside us and gets us to relate to this military-grade phone that is as tough as that part of us.”

An Oriental Ladies lunch at House of Mandarin

This weekend, get into the festive mood with a multi-genre binge-watch on flix…