This weekend, get into the festive mood with a multi-genre binge-watch on flix festive binge 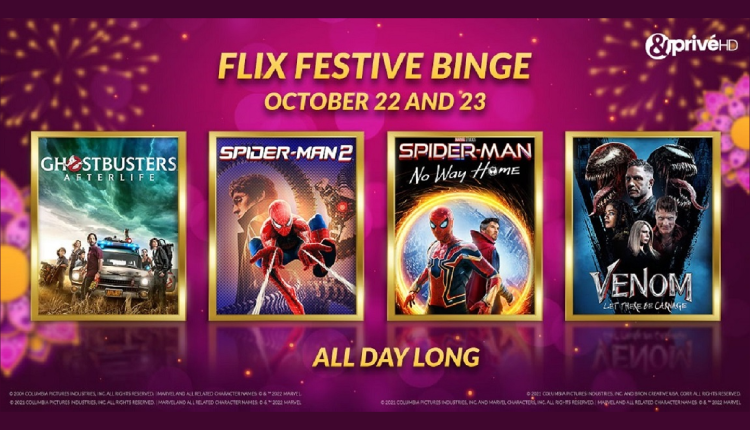 It’s the love for Hollywood films that binds &flixians together. &flix’s Flix Festive Binge will have a relishing line-up of movies from some of the most loved film franchises. This Saturday and Sunday will be an overflow of action, comedy and masala with the included hits. So, if you are in love with high-octane entertainment, mark your calendar for a 2-day binge date with &flix.

On 22nd October, the binge starts at 4:15 PM with the adorable love story of Edward and Bella in the Twilight series. The films bring a dawning story, an immersive romanticised tale which makes for an ideal narrative that spans five films in this popular franchise. Much is discussed about the highly acclaimed plot of this franchise that boasts of fanatics and followers everywhere. The series is based on a world of undying Vampires and strong Werewolf men who lead separate lives unbeknownst to mere mortals. In the subsequent sequels The Twilight Saga: New Moon and The Twilight Saga: Eclipse, hearts are broken, families are split and a once long-standing pact that brought peace to the valley hangs by a thread. Fate feels flawed once again and sacrifices are put to a test when Bella finds herself in a world of unknown where she must figure a future for herself that is bleak, uncertain and riddled with dangers. The closing chapters split into two parts, The Twilight Saga: Breaking Dawn – Part 1 and Part 2 can simply be described as the perfect finish to an evening of entertainment that has an ending, we guarantee you will not see coming. The day will also showcase Sniper: Reloaded and Sniper: Ultimate Kill, parts of the extremely loved action film franchise – Sniper followed by Ghostbuster franchise films – Ghostbusters, Ghostbusters 2, and Ghostbusters: After Life. The first two films in the horror-comedy franchise bring out a story of three parapsychologists who are forced out of university funding and decide to set up a ghost removal service in New York, attracting frightened yet sceptical customers. Ghostbusters: After Life takes a leap after the first two and revolves around a single mom and her two kids arriving in a small town, as they begin to discover their connection to the original Ghostbusters and the secret legacy their grandfather left behind.

The second day, 23rd October brings Peter Rabbit and its sequel followed by the horror watch Goosebumps and Goosebumps 2: Haunted Halloween. Coming next is Venom: Let There Be Carnage which is a part of the Marvel superhero universe and aims at building up the multiverse. The character forms a key part of the upcoming marvel multiverse collections as well. Next up is the favourite superhero of all time Spider-Man. Starting with Spider-Man 2, the binge goes on with Spider-Man: Far From Home, Spider-Man: No Way Home and Spider-Man into the Spider-Verse.

Be a smart host this festive season

Satisfy Your Sweet Tooth With A Berrylicious Affair At Glazed

This Republic Day, Feast on a parade of flavours at The Creek

Goodbye 2022: A look back at the Top 7 series that ruled OTT platforms