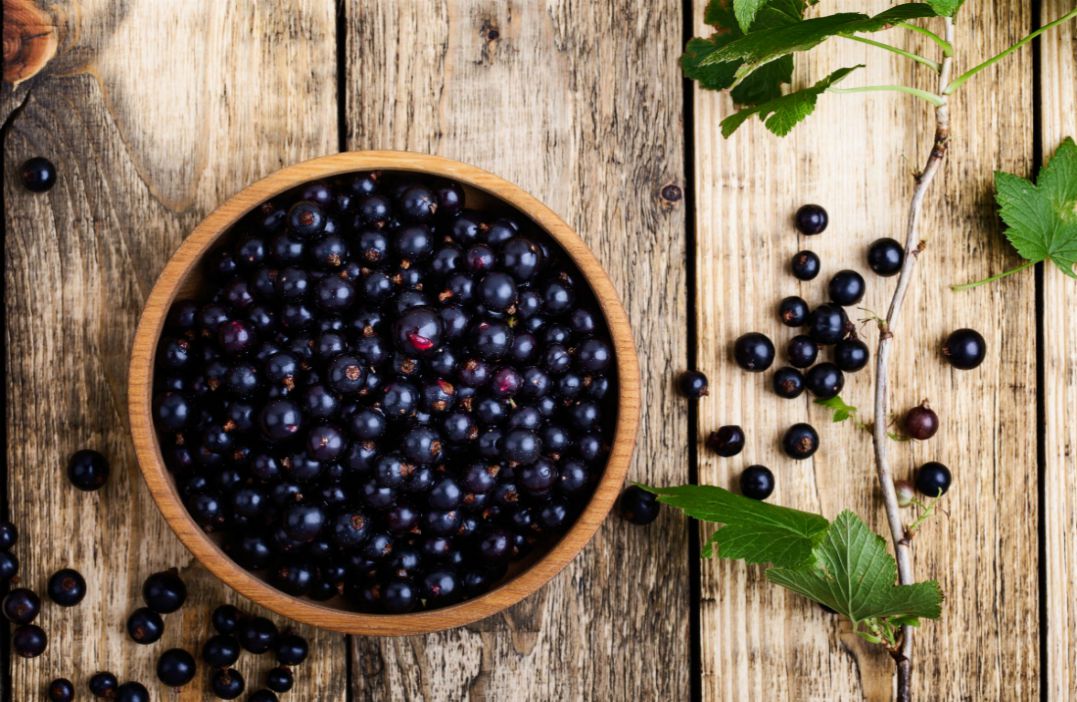 Known to be “the forbidden fruit” in the United States, the fruit is the powerhouse of several nutrients such as anthocyanins, polyphenolic substances, antioxidants, vitamin C, and gamma-linolenic acid (GLA). People even use the whole of the plant for its various health benefits from the healthy flowing of blood to good gut health. The extracts of blackcurrant are shown to reduce the risk of metabolic conditions such as type 1 and type 2 diabetes.  So, let’s check out the following health benefits of blackcurrant fruit.

IMPROVES THE IMMUNE SYSTEM: Along with vitamin C, blackcurrant is high in antioxidants and anthocyanins as well as a wide range of properties such as antimicrobial, anti-inflammatory, antiviral, antitoxic, and other properties. With these amazing nutrients, blackcurrant is helpful in strengthening the immune system, soothing the sore throat, and easing flu symptoms as well. Several studies have been exhibited that blackcurrant could be helpful in boosting up the immune system.

BENEFITS THE EYES: Research has shown that GLA and linolenic acid, which are found in vitamin C might be helpful in treating dry eyes. Since blackcurrants are rich in vitamin c, it has been helpful in improving eye functioning such as the eyes’ ability to adapt to the dark, improves blood flow to the eyes, it even slows down the process of visual field deterioration in people with glaucoma and the symptoms of visual fatigue. So, when you have blackcurrant as supplements, it could be extremely helpful for those people who work on a computer or laptop every day.

COMFORTS THE STOMACH BY AIDING DIGESTIVE ISSUES: As the berries are high in flavonoids, it is helpful in causing smooth muscle relaxation. The extract of blackcurrant could be shown relaxing contractions in the gastrointestinal tract as per the studies. Even the leaves of blackcurrant have been used in folk medicine to treat diarrhea.

AUGMENTS KIDNEY HEALTH: The presence of antioxidant and anti-inflammatory properties in the blackcurrant fruit is helpful in preventing chronic kidney disorders. It protects your excretory system from inflammation and infections and prevents the formation of kidney stones. It also helps in the excretion of excessive citric acid and oxalic acid from your body.

PROMOTES BRAIN HEALTH: The presence of antioxidants is helpful in protecting your central nervous system. It fights against the free radicals which are known to stimulate neurodegenerative diseases such as Alzheimer’s, Huntington’s, and Parkinson’s diseases. But with the help of blackcurrant, you could reduce the neuroinflammation as they are rich in anti-inflammatory molecules. It would even assist you in improving memory, learning, and cognitive abilities.

REGULATES LIVER HEALTH: While you consume alcohol more than the moderate level, it would be spoiling the function of your liver. It would lead to other problems such as the formation of free radicals and reactive oxygen species which would then lead to trigger inflammation. But then, blackcurrants are helpful in protecting the structural lipids and proteins from the attacking of reactive oxygen species. However, the skins of the fruit are seemed to show anti-proliferative effects on cancerous liver cells.