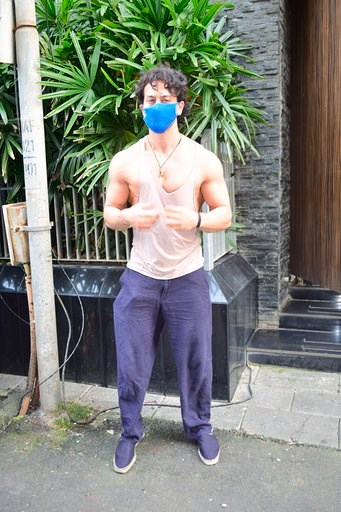 Tiger Shroff was clicked at a dubbing studio in Bandra, Mumbai. For the outing, the actor opted for a muddy-down Tee-shirt, jumper and sports shoes. He wore a blue mask to prevent the spread of corona-virus.

The actor seemed in a good mood showcasing his muscles and happily posing for the paparazzi.

Earlier in the day, Tiger Shroff was snapped in Andheri, where the actor was shooting for his forthcoming project. He was seen flaunting a well tailored sharp trousers, black shoes and of course, a vest to showcase his chiselled body.

Tiger Shroff is busy with his debut single, Unbelievable. The actor shared a dreamy motion poster of his upcoming single and announced his debut as a singer.

The song is produced by Big Bang Music. The single has been penned by DG Mayne and Avitesh. The music video reunites Tiger Shroff with SOTY2 director Punit Malhotra for the second time. The song will be out on September 22.

On the work front, Tiger has three films under his belt, from Vikas Bahl’s sports drama, Ganpat, in which he plays a boxer to Sajid Nadiadwala’s Heropanti sequel and the Rambo remake with Rohit Dhawan.