5 Weird Pairs of Footwear on the Internet 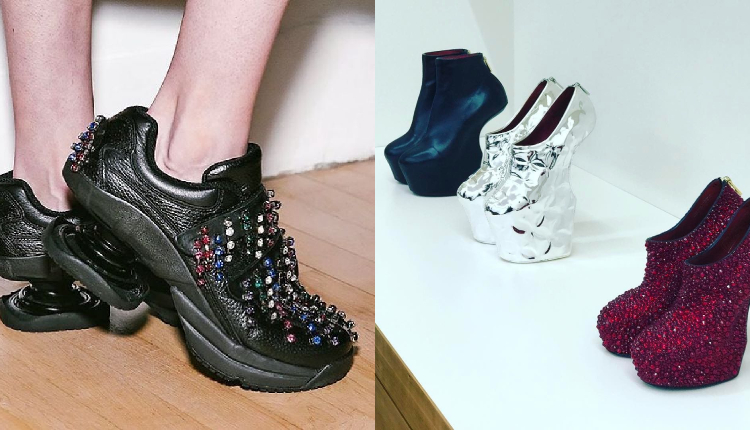 Have you ever come across truly bizarre footwear anyplace in the world? We did, after all. We recently observed some pretty uncomfortable-looking odd footwear being sold on the internet and thought it would make a great blog post. This post is for you if you are always curious about bizarre occurrences in the world. So keep reading to see some of the most unusual footwear for both men and women that we discovered on the internet. Just check out the following 5 weird pairs of footwear on the internet.

Top weird pairs of footwear on the internet:

The 50 Shades of Pain Shoes

Who would develop a shoe that will almost certainly cause serious agony, if not more, to someone’s leg? That is the first thing that comes to mind when we look at these shoes. And, to answer the question we posed, men did. And, yes, this strange pair of shoes was designed for women. If you look at it for more than a minute, you will most likely end up with a fracture or more. Think about what would happen if you wore it. Oh, and imagine what those men who invented this were thinking. Obviously, we’re guessing nothing.

You may also like: Footwear Trends That Never Go Out of Style

From the outside, these may appear to be completely typical footwear. However, as you may have guessed, this one is made of cardboard. That’s correct, someone in the world turned a material that is often used for stationery projects into footwear. When we initially saw an image of this footwear without context, we assumed it was a mistake because what’s so unusual about that? Then we discovered it’s a cardboard shoe made of cardboard that’s suitable for both men and women.

This type of footwear may be something that many would enjoy. Because we’ve seen a lot of short women wearing absurdly large boots to appear taller. So, if you ask us, we wouldn’t be surprised if this was genuinely spotted on someone. This is a pair of unisex boots. So, if you want to go stomp on someone with a guy companion of yours, you should probably get this (we’re joking).

You might be wondering what’s so bad with wearing a shoe loaded with clay flowers. Everything is wrong. However, if you prefer not to listen to the fashionistas in town and prefer to follow your own style, you should take a look at them. Buy a lot of extra glue and add all of the art stuff, such as papers, that you may have to lie around in your house for added beauty. Who can say? You might be able to pull it off flawlessly.

A heel without a heel

This particular one was worn by a few celebs as a result of their stylists. Consider how much discomfort you’ll feel if you hear a heel that doesn’t have any back support. Basically, you’ll have to walk with your leg fingertips. Your legs will most likely perish as a result, but hey, if it’s fashionable, you gotta do it, right? This brilliant idea came from a man named Alexander McQueen (which, again, comes as no surprise). The design was actually added to an autumn and winter fashion category the year he chose to reveal it. We don’t know about you, but we can’t stand looking at these heels for more than a minute.

Other unusual footwear we discovered on the internet:

Have ever come across any unusual footwear? Have you tried on or purchased any of that footwear? Please leave a comment below.