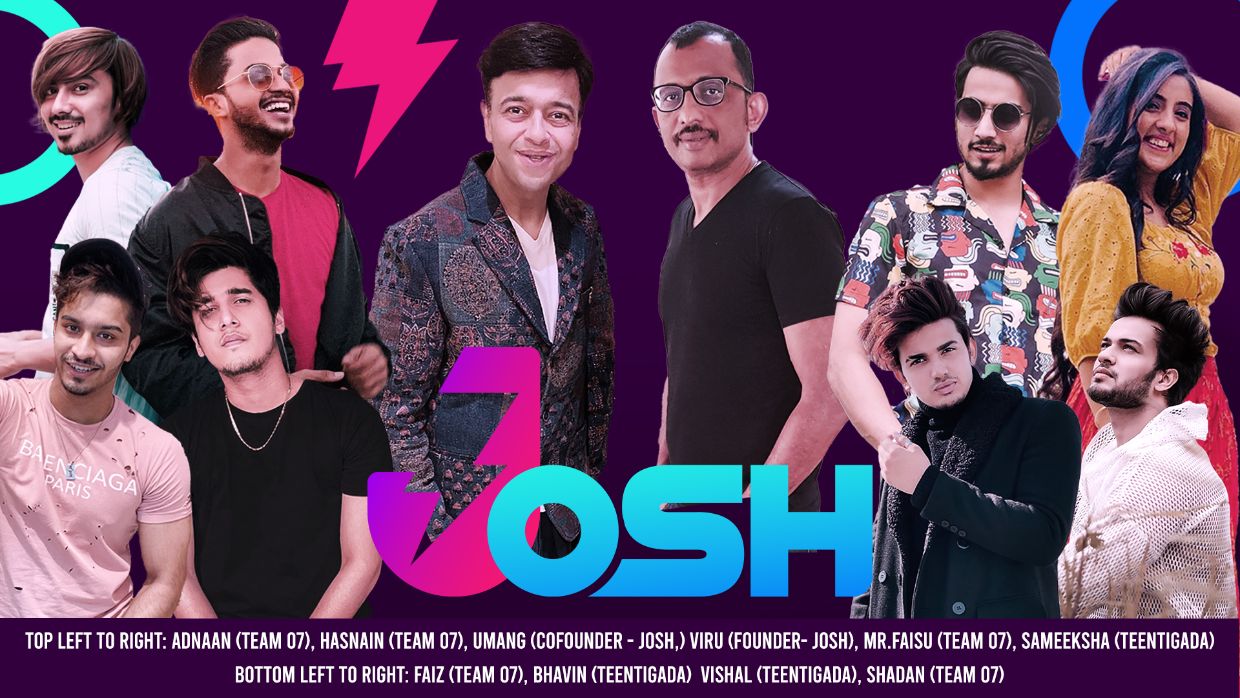 ~Paves the way for Dailyhunt’s family of apps~

The platform’s first challenge i.e. #JoshMeinAajaa is testament to its soaring popularity. In just 96 hours after its launch, 200 top creators across India descended upon the platform performing to the now viral “Josh Anthem” composed by Clinton Cerejo and written by Amitabh Bhattacharya. The challenge clocked 953 million video views, earning 269.1 million hearts/likes and 307K UGC video uploads.

Umang Bedi, Co-Founder, Dailyhunt said, “Josh is a mahagathbandhan (mega confluence) of the country’s best creators, the biggest music labels, the hottest entertainment format, formidable user demographics and the largest local language platform! It is truly a made-in-Bharat.for-Bharat.by-Bharat.in-10-Bhartiya-languages.hosted-in-Bharat short video platform. We are humbled by the overwhelming endorsement it has received.”

Virendra Gupta, Founder, Dailyhunt reiterated, “Josh is the manifestation of our commitment to three big promises. First, to play our part in the Digital Bharat and AtmaNirbhar Bharat initiatives. Second, to empower the large and indigenous ecosystem of talented creators in every nook and corner of our country. Third, to promote the rich heritage and culture of India and make it really big. The success of platforms like Josh is the success of Bharat.”

Visibly a fan favorite, Josh now hosts 200+ exclusive creators on its platform including some of India’s biggest like Faisal Shaikh (Mr. Faisu) and his Team 07 pals, Sameeksha Sud and her Teen Tigada counterparts, Bhavin Bhanushali and Vishal Pandey. True to its proposition, the list goes beyond to include incredibly talented artists who are a true and complete representation of Bharat.

Bringing the power of music to the madness of creativity, Josh also announced collaborations with India’s biggest music labels T-Series, Sony, Zee Music and Divo Music offering users one of the largest and widest music libraries across all Indian short-video platforms.

Bhushan Kumar, Managing Director, T-Series said at the launch, “Music has and always will be the string that binds communities. We at T-Series are very proud to associate with Josh. With music being an important part to content creation, we are glad to partner with brands who help shape a strong bond between music and creators.”

Neeraj Kalyan, President, T-Series added, “We welcome Josh to the world of legitimate music. We are thrilled to partner with Josh at its launch and play our part in letting creators all across the country express their creativity and talent on Josh.”

“We congratulate the team at Dailyhunt for the launch of Josh. We are excited to partner with the Josh team hoping to create a great content consuming experience. We are positive such collaborations will positively shape the collective future of the music industry and content consumption experience for consumers,” said Anurag Bedi, Business Head, Zee Music Company.

“We are glad to be associated with Josh as one of their partners. DiVo being one of the largest regional focussed content companies in India has already multiple engagements ongoing with Josh across music licensing, movie / studio partnerships, talent onboarding and more. We see a great potential in the app to generate user content and which in return can help in discovery of content,” added Shahir Muneer, Founder & Director, DiVo

Users can now enjoy bite-sized videos up to 120 seconds across various categories namely viral, trending, glamour, dance, devotion, yoga and cooking among others as content takes on new avatars in this lockdown. With an enviable music library and an interactive tool suite, every Josh user can now unleash their hidden superstar.

“I’m really stoked that I had the opportunity to launch Josh’s first India challenge with Bhavin and Vishal. Josh works constantly on its game to give us a seamless, top-notch creator experience. Nothing says it like 2 million fans in 2 weeks. More than that, it’s allowed me to feel united with my creator community and inspires me to bring my best self to Josh every day,” shares creator Sameeksha Sud.

“I’ve been waiting to say #JoshMeinAaja to my many fans and well-wishers. Even while speculation was rife around my platform of choice, Josh was always the perfect fit for me. I am honored to share screen space, literally, with a most eclectic set of creators on a truly made-in-Bharat-for-Bharat app,” adds creator Mr Faisu.

Josh, currently on Android, will soon be available to iOS users as well. Since its inception, Dailyhunt’s singular focus has been to serve Bharat, giving users access to multi-lingual content that keeps them informed, entertained, and connected. Josh is the next big step in this continued effort that strategically aims to nurture a family of apps powered by social.