A Real Man with 96% of his body covered with Hair? Do you know? 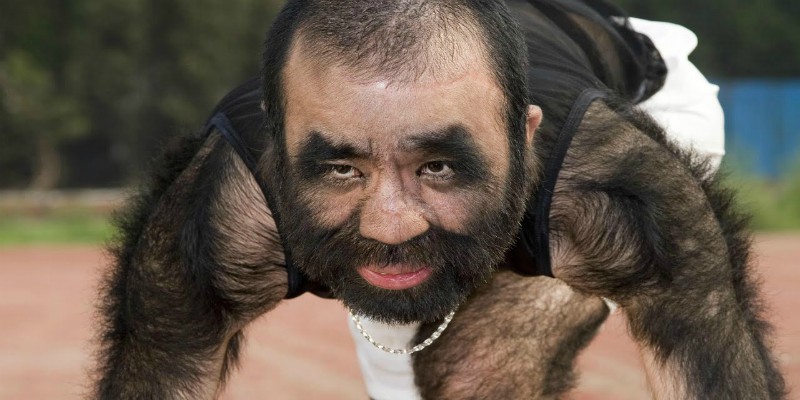 The Hairiest Man in the World – Yu Zhenhuan!

First of all, Have you heard of the Hairiest Man in the World? Yu Zhenhuan is an aspiring rock star of China and Guinness World Record holder for the ‘Hairiest Man in the World.’ Born at Liaoning in China in 1979, 96% of Yu Zhenuhan was covered with thick hair and it started growing when he was at the age of two. He used to be called ‘caveman’ and was tossed stones at when he was an innocent kid but he was clear in one thing that he didn’t allow such pieces of stuff to affect his ambitions. He was clear in his brightest path and so he could accomplish what he really wanted at the very young stage of his life. And that’s how it made him step into the acting world, thereby made his acting debut at the age of six in the movie “A Hairy Child’s Adventure.”

The world’s Hairiest Man has had five different operations to remove hair from his nose and ear which in turn caused trouble in hearing and breathing. Lastly, he did his recent operation in 2009 when he struggled to remove his hair using laser treatment but it was in vain.  Meanwhile, Yu was looking for a woman with an amazing personality and only a few met according to his criteria but it was also in vain because of long-distance relationships. He came across so many breakups in his life.

And almost every time, he has talked about removing his hair through plastic surgery but it was so many years ago and we have not from him after that. He also once stated that ‘I thought I was the best candidate, as I look like a monkey and my nickname is monkey man’.  The man who does not really felt the shame of his nicknames instead he brought his nicknames. He has been clear all through his life where he did not let silly pieces of stuff to divert his goals and achievements.

A Real Man with 96% of his body covered with Hair? Do you know?Do You Know The Hairiest Man In The World – Yu Zhenhuan!
0
Share FacebookWhatsAppLinkedinTwitterPinterestEmailFacebook MessengerTelegramViberPrint

Interesting Facts About Alcohol Which Nobody Told You