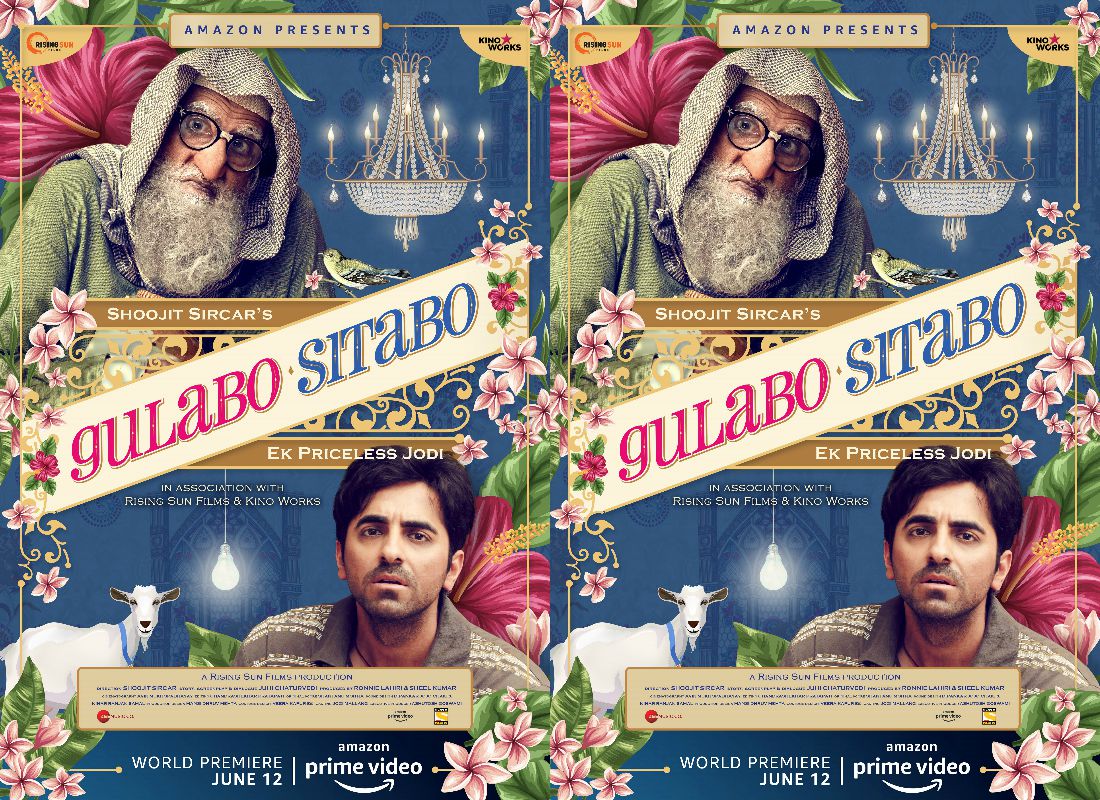 Amazon Prime Video today announced the global premiere of the highly anticipated Hindi film Gulabo Sitabo exclusively on the streaming service. Directed by Shoojit Sircar, the film stars Amitabh Bachchan (Black, Piku) and Ayushmann Khurrana (Shubh Mangal Zyaada Saavdhan, Andhadhun) in the lead. The movie will premiere exclusively on the 12th of June, 2020 on Amazon Prime Video and will be available in 200 countries and territories worldwide.

“At Amazon, we’re listening to our customers, and working backward from there,” said Vijay Subramaniam, Director and Head, Content, Amazon Prime Video, India. “Gulabo Sitabo is one of the most anticipated films of the year. We are happy to exclusively premiere Gulabo Sitabo on Prime Video. It is the first step in our endeavor to bring superior cinematic experiences to our customer’s doorstep.”

“This is the dawn of a new era for Indian entertainment,” said director, Shoojit Sircar.“I am happy that a global audience will be able to watch our gritty dramedy, and enjoy what the film has in store for them. Gulabo Sitabo is a quirky, light-hearted movie that the audience can enjoy with their families. It has been a wonderful experience working with Mr. Amitabh Bachchan and Ayushmann Khurrana on the film.”

“Indian audiences have been eagerly awaiting the release of Gulabo Sitabo and we are delighted that Amazon Prime Video will now be premiering the movie for our customers. The global release of Gulabo Sitabo on Prime Video, in over 200 countries and territories, will ensure maximum reach and visibility for the film not just in India but around the world. We are excited about the new offering and are happy to, once again, bring to our customers the best of entertainment through this release,” said Gaurav Gandhi, Director and Country General Manager, Amazon Prime Video India.

“Gulabo Sitabo is a slice of life, a dramedy that is a must-watch for families at home,” said actor Amitabh Bachchan, “I was excited about my role since the first time Shoojit showed me the character’s look. It took me almost 3 hours each day to get into character with its different looks.I had a wonderful time working with my very talented co-star Ayushmann Khurrana. Even though we are constantly bantering in the film, it has been a pleasure working with him for the first time. This family entertainer has the power to cut across geographic boundaries and we are pleased to bring Gulabo Sitaboto audiences across the globe.”

Actor Ayushmann Kurrana said, “Gulabo Sitabo is a special film for me. It made me reunite with my mentor Shoojit da after Vicky Donor. Whatever I’m today is because of him and I’m happy that he made me a part of his vision again. Gulabo Sitabo also sees me share the screen space with Mr. Amitabh Bachchan for the first time and it’s a huge moment, it’s a dream come true for me. I have secretly wished to work with him for many, many years and Shoojit da made this happen and I will be indebted to him forever. It has truly been an honor for me to work with a legend and I feel enriched as an actor after the experience. What I love about the film is its sheer simplicity – the fleeting moments of simple humor in the banter between a landlord and tenant make this film really special. I hope audiences love the film and our chemistry when it premieres.”

Starring Amitabh Bachchan and Ayushmann Khurrana, Gulabo Sitabo is the quirky tale of two slimy scheming foxes in a game of one-upmanship, each one attracting other members to their clan and each one with an agenda of his own. A Rising Sun Films production, Gulabo Sitabo is directed by Shoojit Sircar, written by Juhi Chaturvedi and produced by Ronnie Lahiri and Sheel Kumar.

Gulabo Sitabo will join the thousands of TV shows and movies from Hollywood and Bollywood in the Prime Video catalog. These include Indian-produced Amazon Original series like Four More Shots Please!,The Family Man, Mirzapur, Inside Edge and Made In Heaven, and award-winning and critically acclaimed global Amazon Original series, including Tom Clancy’s Jack Ryan, The Boys, Hunters, Fleabag and The Marvelous Mrs. Maisel, all on Prime Video, which is available at no extra cost for Amazon Prime members. The service includes titles available in Hindi, Marathi, Gujarati, Tamil, Telugu, Kannada, Malayalam, Punjabi, and Bengali.

Prime members will be able to watch Gulabo Sitabo anywhere and anytime on the Prime Video app for smart TVs, mobile devices, Fire TV, Fire TV stick, Fire tablets, Apple TV, etc. In the Prime Video app, Prime members can download episodes on their mobile devices and tablets and watch anywhere offline at no additional cost. Prime Video is available in India at no extra cost with Prime membership for just ₹999 annually or ₹129 monthly, new customers can find out more at www.amazon.in/prime and subscribe to a free 30-day trial.