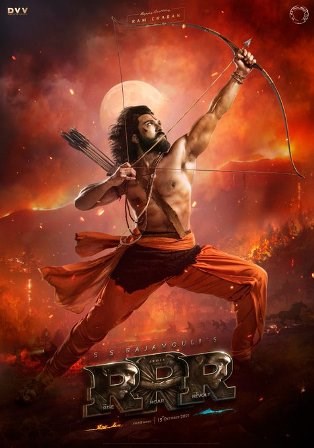 The maker of RRR Movie is out with a stunning new poster of Ram Charan as Alluri Sita Ramaraju.

SS Rajamouli helmer RRR will see Ram Charan in the very ferocious avatar of Alluri Sita Ramaraju, a brave and honest man full of integrity. A fictional take on the legendary freedom fighter of the same name, Ram Charan looks fierce and daring in this avatar.

Director Rajamouli’s first choice to play the character was Charan because he brought to the table the combination of calmness and ferocity. The filmmaker took to his social media and dropped the new poster.

Sharing the same, Ram Charan tweeted, “Bravery, honour and integrity. A man who defined it all! It’s my privilege to take on the role of #AlluriSitaRamaraju #RRR #RRRMovie @ssrajamouli @tarak9999 @ajaydevgn @aliaa08 @oliviamorris891 @RRRMovie @DVVMovies”

The film’s music is scored by M. M. Keeravani with cinematography by K. K. Senthil Kumar, and editing by A. Sreekar Prasad. The film’s initial release date of 8 January 2021 has been deferred due to the COVID-19 pandemic. The film is now scheduled to release on 13 October 2021 in multiple languages.