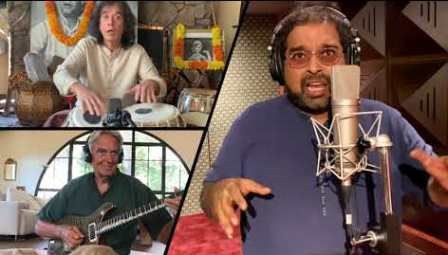 After teasing the fans with a picture yesterday, Shankar Mahadevan makes the big reveal. The first ever collaboration of three legends – Zakir Hussian, John Mclaughlin and Shankar – Sakhi is out and this one is dedicated to healing.

As the world is seeking to heal itself from the blight of a fearsome pandemic, John McLaughlin, Shankar Mahadevan and Zakir Hussain offer a new recording of their expansive, collaborative incantation “Sakhi” – recorded via ISDN from each artist’s respective home.

Shankar Mahadevan dropped the song on his social media. He tweeted, “Presenting Sakhi a song that will always be close to my heart! Hope you enjoy it as much as I did recording it with @jmcl_gtr and @ZakirHtabla…Share the music, Love and care for each other. @MusiCares”

The performance is a gripping testament to the profound awe, wonder, and spiritual intensity unleashed when these three iconic figures join together.

The Most Stunning Euphoria Inspired Makeup Looks You Should Know

The miles melt away, as McLaughlin (in Monaco), Hussain (in California), and Mahadevan (in Mumbai) fluidly trade supporting and soloist roles, delighting in one another’s musicianship and intangibly conveying the song’s message of support and trust.