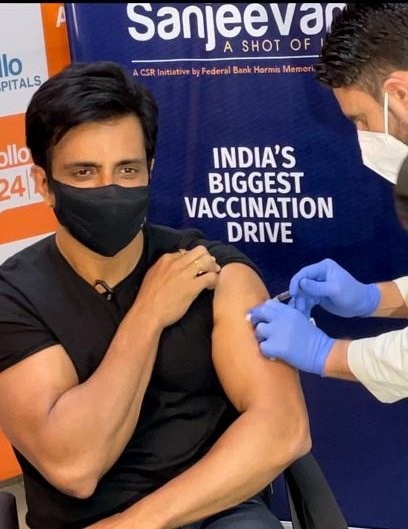 Actor Sonu Sood on Wednesday took the vaccine for Covid-19 prevention at a hospital in Amritsar, Punjab. The actor also launched “Sanjeevani: A Shot of Life”, an initiative to encourage people to get vaccinated and raise awareness.

Sharing the picture of himself while getting the first shot of Covid-19 vaccine on his twitter handle, Sonu wrote, “Got my vaccine today and now it’s time to get whole of my country vaccinated. Started the biggest vaccination drive “Sanjeevani” which will bring awareness and get our people vaccinated.  @IlaajIndia @Network18Group @SoodFoundation”.

Sonu Sood was last seen onscreen in a Telugu action-comedy film ‘Alludu Adhurs’ which released in January, 2021. He will next be seen in Yash Raj Films productions historical action drama film ‘Prithviraj’ alongside Akshay Kumar, Manushi Chhillar and Sanjay Dutt in lead roles. The film scheduled to release in theatres on 5 November 2021 coinciding with Diwali.