It’s all-new Sri Lanka’s modish luxury train! Sri Lanka instigated ‘Make in India’ swanky train very recently and it looks all stunning and staggering to all the eyes. It has been flagged off in Sri Lanka and the interesting fact about the train is that it is manufactured completely under the ‘Make in India’ initiative.

It was on Wednesday, an opulently amazing train has been launched and the country’s big heads such as the President of Sri Lanka, Maithripala Sirisena together with the country’s Minister of Transport and Civil Aviation, Arjuna Ranatunga and also High Commissioner of India, Taranjit Singh Sandhu flagged off the new luxurious train – Pulathisi Express, which is from Fort railway station in Colombo to Polonnaruwa. 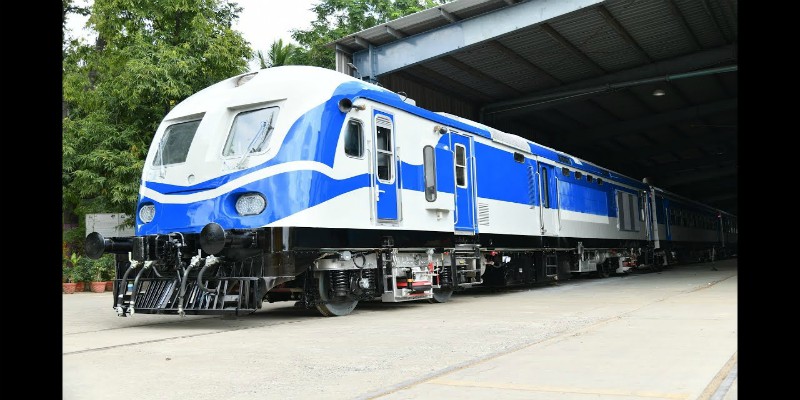 As per the details shared by the High Commission of India, Colombo, the new luxurious train – Pulathisai Express has been equipped with the best-in-class passenger amenities which include modular interiors, an on-board entertainment system and also fully rotating seats in air-conditioned chair car coaches for the passengers to feel the ease. And in this same year, yet another DEMU train manufactured under Modi Government’s ‘Make in India’ initiative which was also flagged off in Sri Lanka earlier. Also, an agreement was signed between Indian Railways and Sri Lanka Railways for the supply of six DEMU (Diesel Electric Multiple Unit) trains sets to Sri Lanka. Each of these train sets incorporates with 13 coaches, totaling 78 coaches for six train sets. Did you know these train sets have been manufactured here in Chennai? Yes! It is manufactured by Integral Coach Factory (ICF) in Chennai. It is also said that excluding these six DEMU sets, 10 diesel locomotives were also to be supplied to Sri Lanka. Some of the astounding features of these DEMU sets include cushioned seats, rotatable seats in AC chair car, modular toilets, GPS based passenger information LCD, oscillating kind of fans which cover 360 degrees along with the wide air circulation facility, aluminum extruded frame luggage racks with a glass bottom and also LED lighting feature. And the swanky and luxurious new train launched here in Sri Lanka was supplied by RITES Limited under an Indian Line of Credit.