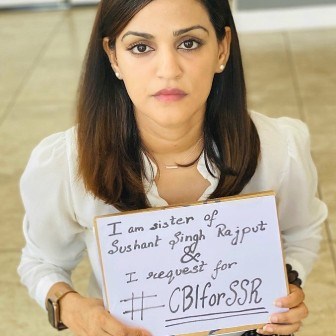 Sushant Singh Rajput’s death investigation case is taking new turns with each passing day. So much so, it has slowly turned into a pot boiler. Currently, the investigation is being done by the Enforcement Directorate (ED). Every other day the lawyer of each party releases something to the media which gives a new turn to the case.

The Supreme Court had reserved the judgement after hearing the plea of Rhea Charkraborty and had asked her, Sushant’s family and other parties to submit notes by Thursday. Amidst this, Sushant Singh Rajput’s sister Shweta Singh Kirti has released a new video where she is urging everyone to stand together and demand CBI for SSR.

Shweta Singh Kirti shared a video and wrote, “We stand together as a nation for CBI Enquiry! Demanding an unbiased investigation is our right and we expect nothing but the truth to come out. #CBIForSSR #Warriors4SSR #justiceforSushantSinghRajput @PMOIndia @narendramodi @AmitShah”

In the video she can be seen requesting everyone to stand together and demand a CBI Enquiry for SSR as the family deserves to know the truth. They deserve justice for Sushant and a closure on this. Else they will never be able to live a peaceful life.

Amit Sadh Pens A Heartfelt Note For Sonu Sood; Thank Him For His First Break

The Supreme Court is scheduled to hear a PIL today, seeking a “unified” CBI probe into the death case of Sushant.