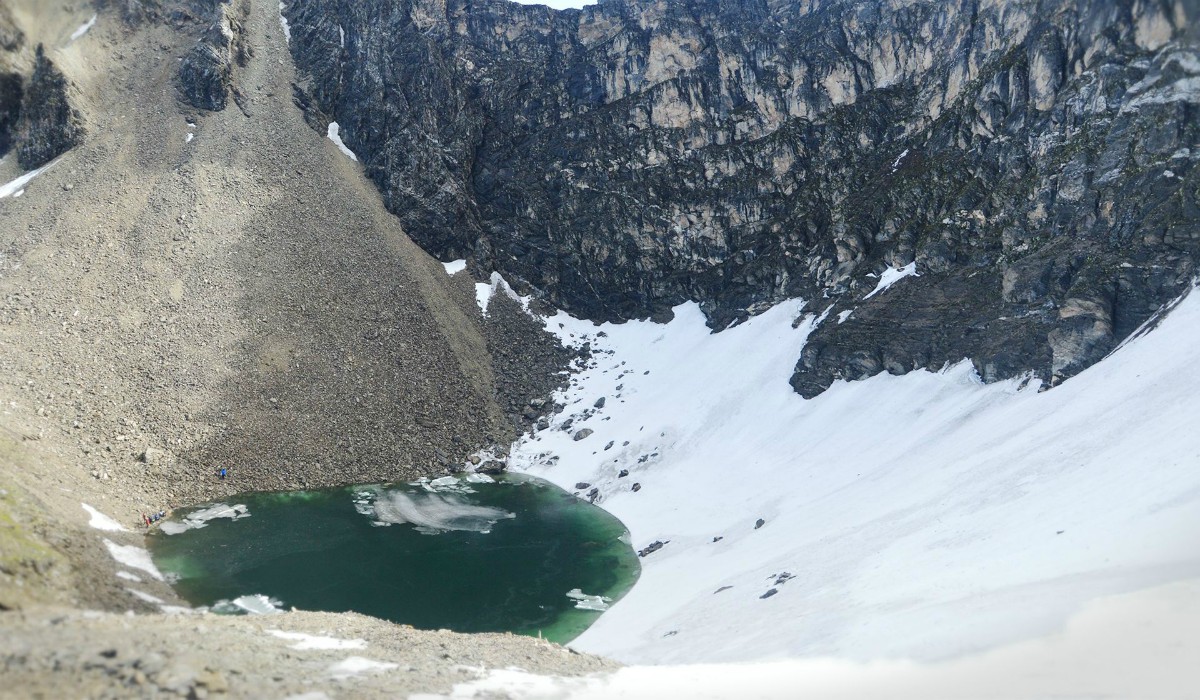 The name Skeleton Lake sounds weird, right? But it is not that weird because the lake itself is encircled by hundreds of ancient skeletons. Do you know who discovered this particular spooky thing at the lake? It was in 1942, a British forest guard of Roopkund and he thus, alarmed the exploration of the lake filled with skeletons.

At 16000 feet above the sea level and at the bottom of the small valley is a frozen lake which is exactly covered by skeletons. When it is time for the ice to melt, there will be several skeletons visible. The more it melts, the more the skeletons will be disclosed. The remains of the skeletons will be lying haphazardly at the edges of the mysterious lake. Many people thought that some horrific incidents had happened years back.

Assumptions were made that the remains are nothing but they are Japanese soldiers who had died of exposure while they tried to sneak through India. But this was only one of the assumptions because many other assumptions were there. But what made the assumption false is that the bones are too old indeed. Only later, officials have realized that these bones were not of Japanese. Multiple tests and researches have undergone to get the exact understanding of the bones but there is no light for the dark path of life. It is shocking how over 200 people must have died in this particular valley. And so for years and years, there was no answer to the question.

Meanwhile, the 2004 expedition at this site, seemed to have revealed the mystery of this horrific place and what caused the death of the people. It was unveiled that the bones belong to the people who lived back in the 9th century. Yet the DNA test revealed that there were two groups of people, in which one a family or tribe of closely related individuals and a second smaller or shorter group of locals. Another shocking news is that every individual had died similarly from the blows to the head. There was a short deep crack in the skulls that appeared not as the result of weapons but of something round.

The bodies also only had wounds on their heads and no other places seemed to be wounded. Damn true to the ancient and traditional folk song amidst the Himalayan women, where the lyrics described as a goddess who is enraged at outsiders who defiled her mountain sanctuary, thus, she rained death upon them by producing hailstones, the 2004 expedition had concluded with the same thing that the 200 people died of a severe hailstorm.

Sadly, after many assumptions, the real discovery of the travelers’ sudden death cause has been proved after these many freaking years leaving behind the name as ‘Skeleton Lake.’ And trekkers seek this place often to explore things here and trekking is the only way to reach this mysterious place. Skeleton Lake is covered with ice for most of the time in the year.

Explore the mystery-revealed Skeleton Lake at Uttarakhand, the puzzled lake for years!