GHASTLY FESTIVAL OF PIERCING THE SKIN TO EXHIBIT THE DEVOTION!

Devotees throng to show their devotion by piercing their bodies!

Body piercers and Kavadi bearers are the main attraction of the festival!

Festivals are always a sign of delightfulness and merriment. These are the major reasons why people are happy even before the arrival of festivals. India is a land of mystery which is extremely difficult to be understood. It has been the land of festivals with different rituals and traditions which might be staggering and stupendous to experience whereas certain festivals would provide the dire feel ever. However, there are several Hindu festivals which are both mesmerizingly happy and awfully hypnotizing with its rituals and customs. One such Hindu festival is known as Thaipusam where devotees carry symbolic burdens of gratitude including milk pots and heavy ornaments. What’s so creepy? People show their devotion by carrying these burdens of gratitude not with hands but the objects are attached to their bodies with honed rods and hooks. This would be extremely awful to watch it and you would feel the person’s pain practicing the ritual. 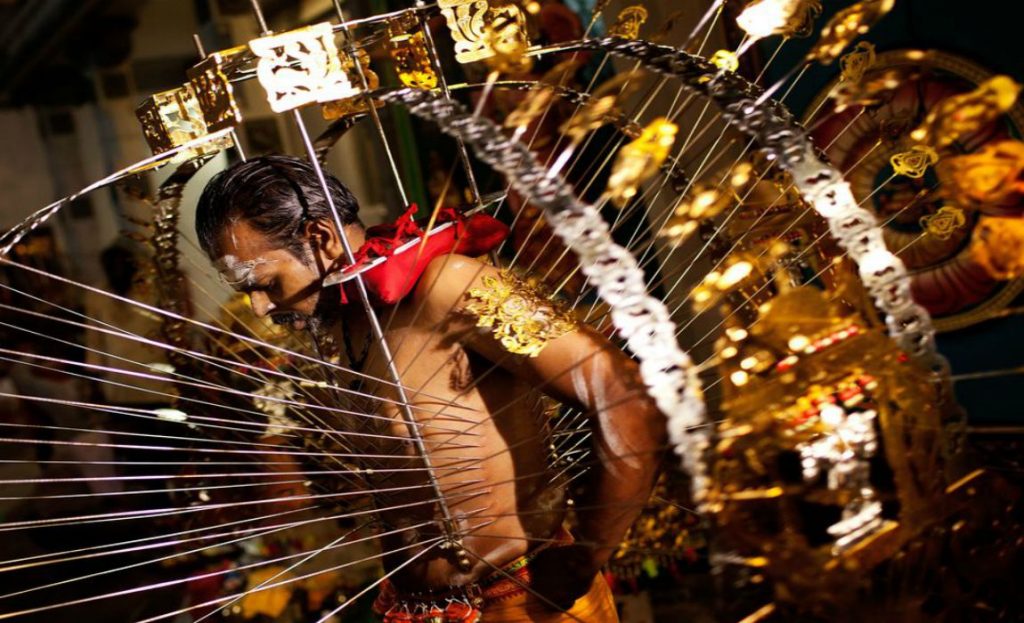 Thaipusam is the celebration of the triumph of Lord Muruga, the God of Courage, Wealth and Wisdom over a demonic evil with a divine spear called vel by which he saved humanity. The name of the festival is derived from the 10th month of the Tamil calendar called “Thai” and “pusam” which is translated as “when the moon is at its brightest”. It is either celebrated in January or February. It is during the time of the festival, devotees whose prayers are answered would go for pilgrimages to express their gratitude towards God with prayers and gifts of devotion. However, some might indulge in carrying kavadis which is known as physical burdens.

5 Promising Health Benefits of Sitting On The Floor While Eating

Generally, Kavadis varies in size and style from the humble paal kavadi (pot of milk) which is usually carried on the head and also with embellished frameworks of steel rods and plywood, laden with huge ornaments. Meanwhile, carrying a kavadi include a certain kind of body piercing to secure it. This tradition of self-sacrifice and the state of being trance devotees is just to overcome the inner demons and also to be instilled with the blessings of Lord Muruga. The one thing which goes unnoticed of the festival is about body piercers. The complete trust of kavadi bearers falls on the body piercers. This is because the body piercers help the devotees to enter a state of trance to destruct them from pain. Ever noticed how could they do it? Well, they would use incense, beating drums and chanting prayers to Lord Murugan it seems. Howbeit, it is odd to hear that people who get their body pierced experience only a little pain.

If you do wanna witness this self-sacrifice of the devotees and get blessings from the God of Courage, just visit the temple which has been dedicated to Lord Muruga.