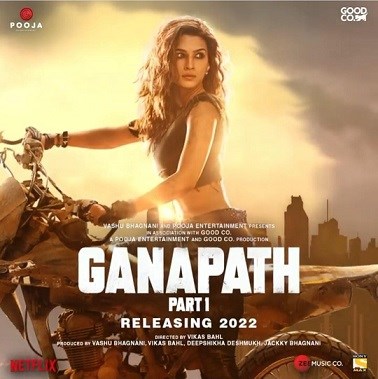 Kriti Sanon will be seen playing the role of badass daredevil in the film and in her introductory teaser, she is seen sporting bikers gear and riding a dirt-bike.

Expressing her excitement about sharing the screen space Heropanti actor, actress Kriti Sanon shared the same, she captioned it, “Meet JASSI!! Super Duper Excited for this one!! Teaming up once again with my very special @tigerjackieshroff Can’t wait for the shoot to begin! Lets KILL it! #Ganapath #VikasBahl #VashuBhagnani @jackkybhagnani @deepshikhadeshmukh #GoodCo @pooja_ent #PoojaEntertainment”

The Vikas Bahl directorial which was announced a few months ago with great fanfare and the viral first look of Tiger Shroff is on the verge of choosing its leading lady.

A Pooja Entertainment and Good Co. production ‘Ganapath’. The actioner is directed by Vikas Bahl. Produced by Vashu Bhagnani, Vikas Bahl, Deepshikha Deshmukh and Jackky Bhagnani, ‘Ganapath’ is set to release in 2022.

Tiger Shroff also has Baaghi 4, Heropanti 2 in the pipeline, the films are announced and deeds will be out soon.