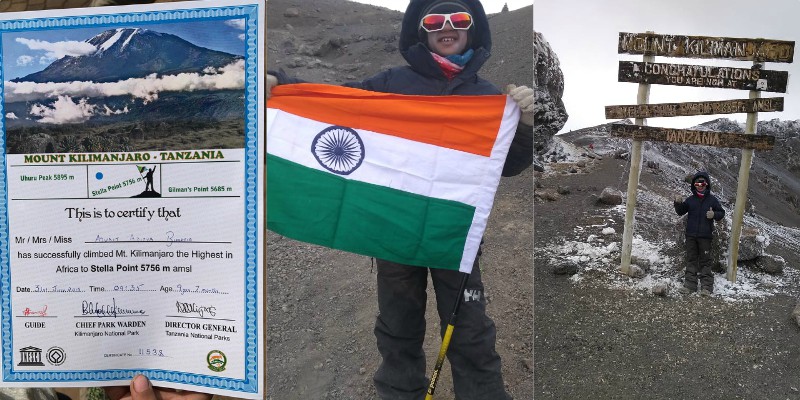 Pune, 13th August 2019 – Advait Bhartia, one of the youngest Indian to summit Everest Base Camp at 6 years old has added a new feather to his already decorated cap by having scaled the Mt. Kilimanjaro at a young age of 9 years. Advait along his mother, Payal Bhartia and expedition leader, Samir Patham began their trek from the Machame route and reached the top of Mt. Kilimanjaro situated at a whopping 18,652 feet on 31st July 2019.

Thin air, reduction in atmospheric oxygen by approximately 50% of the sea level and subzero temperatures ranging from about 21 degrees to -25 degrees Celsius at times are few of the difficulties that summiteers face. To prepare himself for the same, Advait underwent stringent training over a period of 2 months. His routine included swimming for an hour, cardiovascular training like playing football, cricket and tennis in the second hour and climbing 100 floors and practising Parkour was a regular part of the training during the third hour. Advait along with his mother also did treks in Leh & Ladakh and around Pune in preparation for Mt. Kilimanjaro.

“This trek was really difficult but fun at the same time. When I was summiting Everest Base Camp we were living in wooden houses but during the Kilimanjaro trek we stayed in tents and it was a good experience being exposed to snow and the surroundings. I could have completed the trek faster but the mountains were very beautiful and I took a lot of breaks intermittently to take in the beauty of the mountains. I am planning Mt. Elbrus next year but for now, it is back to school for me and I am excited.” said Advait Bhartia.

During the trek, the summiteers addressed him as ‘Simbum ToTo’ meaning ‘Little Simba’. He was the youngest trekker by far during his journey and would often attract the attention of fellow trekkers along the way who were extremely keen to have a picture taken with him as he would be an inspiration for their son or grandson back home. Advait also received a lot of fistbumps and high fives from fellow summiteers during the trek who were mighty impressed to witness a boy this young on an expedition of this stature.

“My journey was cut short 1000 ft. before the top of Mt. Kilimanjaro as I had trouble adjusting to the altitude, however, Advait along with Samir and his Tanzanian guide continued the trek. I am very proud of Advait and his dedication towards completing this trek. On the last day, Advait got emotional and he individually thanked the porters, the tent pitchers and the catering team for all their efforts.” says mother, Payal Bhartia.

“Advait is an excellent example of what humans are capable of doing at a very young age with the right exposure, hard work, dogged determination and mind over matter The boy showed tremendous tenacity and incredible maturity thus allowing him to deal with the various hardships of the journey, the successful completion of the trek makes Advait one of the youngest child in India to scale both Everest Base Camp at the young age of 6 and Mt. Kilimanjaro at 9 years old.” said Expedition Leader and Co-Founder of Adventure Pulse, Samir Patham.

In his young life of 9 years, Advait has proven himself to be a wunderkind. He is an avid skier having skied from Switzerland to Italy over the Easter break. He is also a master surfer. Advait is also internationally certified to plays instruments like the piano, the violin, guitar and drums. He is the youngest Indian to carry an international mandarin language certification.

The trek was organized by Pune-based adventure and trekking company Adventure Pulse. Advait’s trainer Samir Patham had guided him throughout the arduous 12 days of Everest Base Camp and this time through 7 days of Mt. Kilimanjaro, keeping him occupied with stories of mountaineering, legends of Mount Everest, the great Himalayan myth of the Yeti as well as stories by Rudyard Kipling and Ruskin Bond.