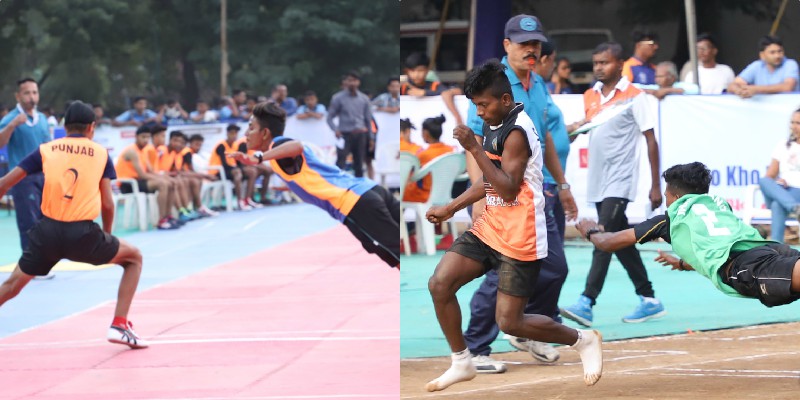 The girls’ team opened their account with an admirable win over Madhya Bharat, team that is credited for starting the National level tournament in India way back in 1956. The girls put up a stellar show to displace the Central Indian team by 6 points and an innings to spare; after a successful chase of 11 points in the first innings.

Later in the day the boys’ team also continued to showcase outstanding form as they maintained their winning streak from day one by overcoming the hefty challenge from their opponent, Punjab. Nothing short of a thriller, the boys from the host team with accurate and timely khos put up a lead of three points in the first innings. Team Punjab tried their best to chase down the points in the second innings but fell short as Gujarat won the match in a nail-biting finish.

Maharashtra also maintained their winning spree as the state boys’ team took up the challenge against Odisha. They started the match on the front foot in the first innings as the team gained 16 points while opponent, Odisha could only manage to put 4 defenders off the mat. Odisha failed to reduce the 12 points gap in the third turn as mastered a meagre 5 points at the end of the second innings. The Maharashtra boys defeated Odisha by an innings and 7 points. The girls also dominated with their presence as they defeated Goa by 15 points and an innings.

Ramji Kashyap was the star for the boys’ team of Maharashtra as he defended for two and a half minutes and secured 5 points for the team while chasing.

In the day’s other matches, Tamil Nadu overcame Bihar in a one-sided play while the girls’ team also displayed an impressive game as they disabled Himachal Pradesh by the margin of 8 points and an innings to seal the match in their favor. Uttar Pradesh boys and girls also put up an all-round show against Tripura to win their second league match.

The Southern India teams of Tamil Nadu, Karnataka and Kerala also registered wins in their respective matches. However, after a confident win on the first day, Rajasthan girls went down to Karnataka with a scoreline of 5-15.

5 jewellery trends to amp up your look this Diwali