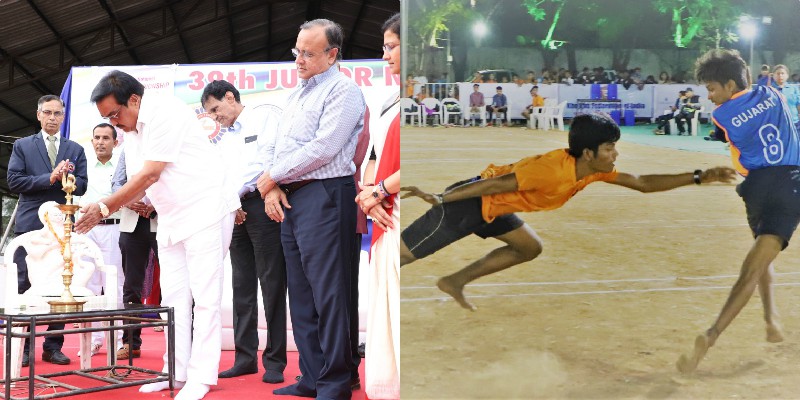 Surat, October: Host Gujarat and Rajasthan started their campaign with an impressive victory as Manipur and Kerala  also registered a win on the first day of the 39th Kho Kho Junior National Championship at SMC School in Surat.

The boys from Gujarat started off with a thumping win over Madhya Pradesh as they won the match in a one sided game. The local boys posted a 26-12 win with a margin of innings and 14 points to wrap the match against MP. Vijay Bakad put up an all round  show with close to three minutes of defensive play and chased the opponent to pick 4 points for the team.

Whereas in the first match of the day the girls from Rajasthan and Uttrakhand had a showdown. Rajasthan defeated Uttrakhand by an inning and 16 points. Sunita Damita stood out for Rajasthan. For Uttrakhand, Nisha Mehra gave it her all but failed to create a breakthrough for the team.

The boys from Manipur dominated  Dadra & Nagar Haveli by 15 points and an innings. as the North East team finished the match 20 – 5.

Th khomdom Singh was the star player for Manipur as he defended swiftly for 3 minutes and 30 seconds and remained not out while also being equally effective, giving the team a great start with  2 straight points on the offensive end

Besides Rajasthan and Manipur, the girl’s from Kerela also started their campaign on a winning note. They defeated Jharkhand by an innings and 7 points as they one sidedly out scored the Jharkhand girls with a 15 – 8 score line.

The Junior Nationals kickstarted with a colourful opening ceremony where Budding school girls displayed a colourful traditional dance as Shri C R Patil, Member of Parliament from Navsari constituency  and Sangeeta Patil, Limbayat MLA along with Mayor Dr Jagdeesh Patel were present at the inaugural ceremony, lighting the lamp and declaring the official opening of the tournament. Also present was the National team from Nepal who are currently in India for an exposure trip and gain valuable experience during their stay here.

The 39th edition of the Junior National has 30 teams each and a total of 720 players in boys’ and girls’ category vying for National glory.