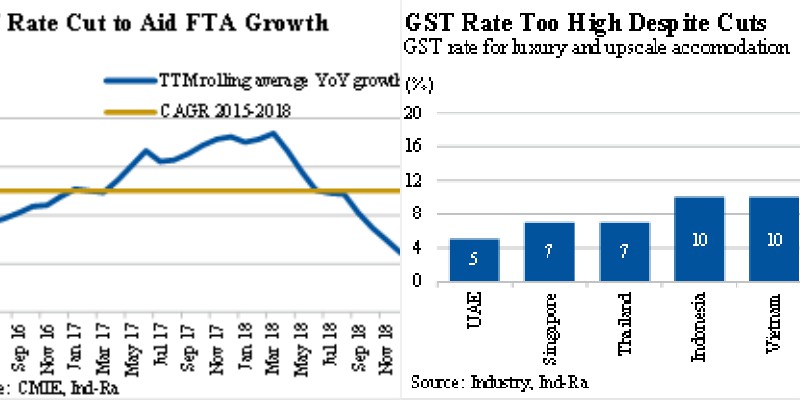 GST Reduced on Hotel Room Tariffs: The GST Council, in its 37th meeting held on 20 September 2019, rejigged the tariff slabs as well as the GST rates as below:

Rate Cut to Aid Growth Amidst Favourable Demand-Supply Dynamics: Occupancy rates across hotel categories has been on an increasing trend between FY15-FY19 (FY15: 59.8%; FY16: 63.3%; FY17: 64.8%; FY18:65.7%, FY19: 66.7%) on the back of strong growth in domestic (2015-2018: 7% CAGR) and inbound foreign travel (2015-2018: 10% CAGR) fuelled by demographic developments coupled with ease of travel and discounts offered by online travel /hotel aggregators amidst limited supply additions (5.50% CAGR over FY15-FY19 vis-à-vis 11% over FY11-FY15). The industry, however, witnessed deceleration in growth rates of domestic travellers (2018 estimate of 5%-7% yoy vis-à-vis 13% in 2016) as well as foreign tourist arrivals (FTA) in the last 18-24 months. Ind-Ra believes the recent GST rate cut is likely to provide broad-based impetus to the demand across hotel categories; major beneficiaries could be luxury and upscale hotels as they revert to or even go below tax rates in the pre-GST era in some cases (state taxes in this segment ranged between 18-25% before GST was implemented).

Likely Improvement in Competiveness of Luxury and Upscale Hotels: The yearly foreign tourist arrival (FTA) in India has been encouraging over 2015-2017, however, growth has decelerated since March 2018. The trailing twelve months rolling growth rate reached 2% in July 2019 on year-on-year basis- one of the lowest it has been since 2016.

Among popular neighbouring destinations, India has the highest tax rate for luxury and upscale hotels. This continues to be true even after the recent cut in GST. However, Ind-Ra believes the rate cut will help improve India’s competitiveness among the other countries and resultantly, attract foreign travellers.

Value Migration, Although Marginal, Limited to Luxury and Upscale Hotels: According to Ind-Ra’s analysis, a customer would end up saving 8% on luxury hotel and 5% on the rest of hotel categories due to the recent GST rate cut. However, the agency believes the customer’s scope for value migration among all hotel categories will remain limited as the difference between ARR of various categories is significant. For example, in the luxury category, the savings are merely 8% as against the price difference of 79% between upscale and luxury categories. This means, it is a fairly unattractive proposition for a customer to upgrade from upscale hotel category to luxury hotel category since the savings do not adequately offset the incremental cost. However, on a case-to-case basis within upscale and luxury segments, the prices of some hotels might be in a tighter range to the savings percentage, and hence, there could be some value migration as the customer prefers to upgrade.