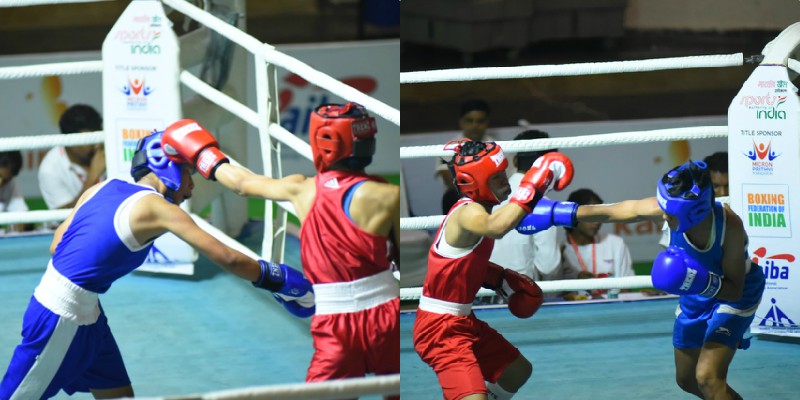 Both Tamanna and Ambeshori Devi had won medals at the Black Forest Cup in June and they continued their fine form in the domestic circuit as well. Ambeshori was thoroughly dominant in her quarter-final bout againt Mizoram’s Naom Chingsannuami en route to her 5-0 win and Tamanna too prevailed over Delhi’s Anjali by an identical scoreline.

Also progressing into the last-four stage from Haryana were Tannu (52kg), Kirti (57kg) and Khushi (63kg). While Kirti and Khushi blanked Andhra Pradesh’s Peddada Kavya and Punjab’s Vishakha respectively 5-0, Tannu advanced by dint of getting an RSC verdict in Round 1 over Goa’s Neha Kadam.

The North-East also shone on Day 4 of this prestigious junior tournament. Joining Ambeshori in the semis were her Manipuri statemates, Tingmala Doungel (48kg) and Shagolsem Bijeta Chanu (52kg).

Mizoram also found a place in the winners’ column through Ruthi Lalhmingthai (52kg) and Rudy Lalgmingmuani (63kg). Both had to work hard to earn their respective victories. While Lalhmingthai staved off a stiff challenge from Tamil Nadu’s Deepa S for a 3-2 win, Lalgmingmuani also had to dig deep to secure a gritty 3-2 win over Manipur’s Tingmelhing Chongloi.

Chandigarh also entered the medal bracket through Harnoor Kaur, an RSC in Round 1 winner over Andhra Pradesh’s Kolukula Krishna Veni.

The six-day tournament, which will pick out the best of India’s rising female pugilists, has a total of 233 boxers participating from 27 states across 13 weight categories. The semi-finals are scheduled on Thursday followed by the grand finale on Friday.